Last week we explored the reasons, cost and advantages and history of brick bonds, as elements of building facades.  This week, we continue with that topic, but go into more detail about the structural advantages of wythe crossing rowlocks and more ornate and arduous brick bonds common in the Victorian architectural era in Washington, DC This article is the second in a series of articles on brick bonds. Click here to read the first part of this topic, in last week’s article.

We examined the running bond and the common bond, prolific in brick masonry construction, in the previous post.  Today, we explore the history of the English bond and the Flemish bond.

The English bond has alternating courses, courses of header facing bricks interspersed with courses of stretcher facing bricks.   In a double wythe wall assembly, this pattern is extremely strong because the two individual wythes of brick are intrinsically interlocked together by design.    Essentially, each alternating course of bricks is laid to span between wythes.  The alternating arrangement creates strength in both directions: laterally and between wythes.

The picture below shows an example of a wall built with an English bond. The brick face in this picture is worn and damaged with vehicle abrasion over time as it is a historic building on an alley facing. 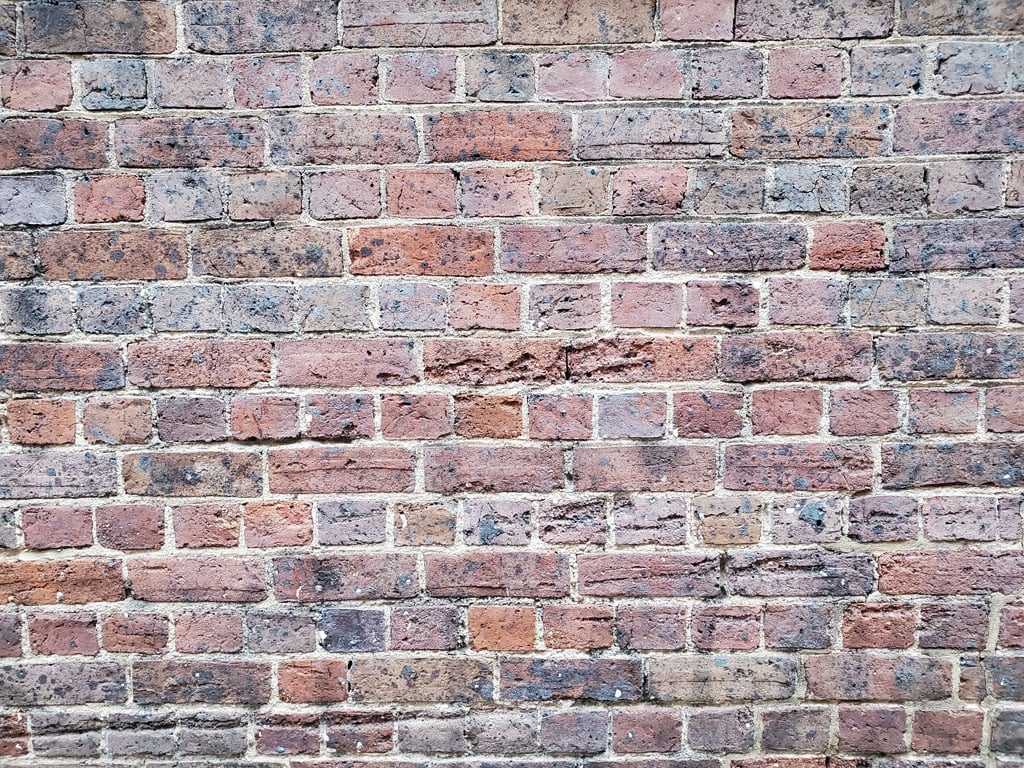 Another picture follows below showing a closer view of the English bond. In this picture you can clearly see the continuous courses of alternating facings. Each header course is followed by a stretcher course.

The term “Flemish” bond is considered by many architectural historians to be a bit of a misnomer.   Earliest uses of the Flemish bond are found from medieval constructions in Europe, but not all in the Flanders region of Belgium.  The Flemish bond is stronger than the running bond and common bond, but weaker than the English bond.  The Flemish bond is considered a decorative bond.  Although, as a point of distinction, it is important to note that there was a higher cost and value associated with the pressed brick front facades, especially when understanding the limits of historic brick manufacturing technologies.

The brick kiln firing fuel source is another point of architectural interest that can be traced back to historic methodologies using old growth timber, rich in  potassium found in hardwood species such as oak wood.   As these hardwoods burned, the brick ends would often take a color different to the unexploded sides of the brick, similar to the semi-vitreous nature of clinker bricks.

Although the Flemish bond is technically weaker than the English bond alternative, little relative strength is lost in comparison in the construction of small buildings.   Historic DC row homes, for example, are generally limited to two to four levels, above grade. They also have a floor span generally less than 20′ between wall centers.   (Measuring from wall centers is a common construction technique which is done to capture the wall space upon extrapolation or summation with adjacent spaces.)  On this type of limited scale, the Flemish bond, although weaker than the English bond, is generally strong enough to create sufficient brick masonry structures.

To describe the difference between a Flemish bond and an English bond, it’s helpful to understand the vocabulary used to describe brick facing. The most common brick facing we see in brick walls is a stretcher facing.  A brick is in a stretcher position when it is laid down on its broad base and we see the long thin width run from side to side, horizontally.  By comparison if we see that same face but vertically, that is  called a soldier position.

If you see the broadest, greatest area of size face of the brick set horizontally, that is called a shiner facing.  If the same facing is rotated vertically, that is then a sailor facing.  Sailor courses or sailor brick facings are somewhat rare, but now and then it will come up, particularly in non-bearing arrangements or in decorative purposes.

The photo below shows an example of the rowlock positioned brick. In the wall shown in the photo, you can see that the brick at the top of the wall is turned perpendicular to all of the double wythe running bond brick in the wall below. The rowlock course bricks are lined up side-by-side without deliberate staggering between bricks in the course below. 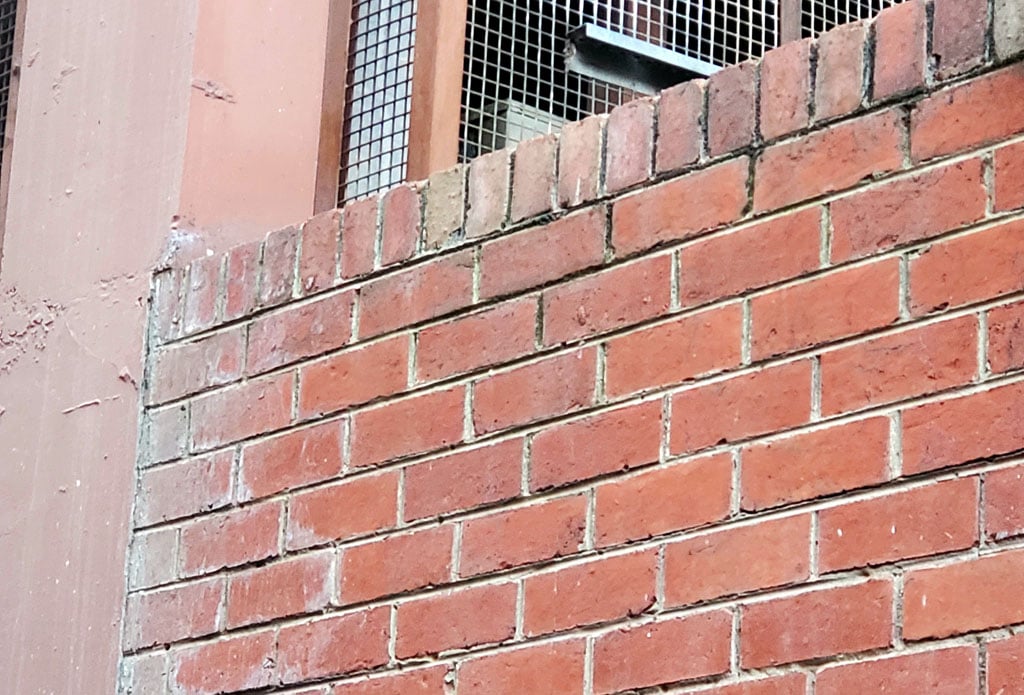 We explained that the Flemish bond is regarded as being more artistic and decorative than many other brick bonds.  Therefore, it can be inferred that Flemish bond buildings have a higher esthetic and architectural value. As discussed, the Flemish bond has a trade off of being weaker but not to the point of being a detriment in its use in limited building sizes.  A third point of consideration is that the Flemish bond was more labor intensive, for original construction than the English bond, namely because the Flemish bond, by design, required a bat brick or brick closer at alternating courses.

Bat brick or brick closer are bricks cut partial sizes to accommodate irregular spacing requirements of walls.   To put this in simple terms consider that bricks are a nominal eight inches in width.   Brick dimensions is an interesting side topic.  Typical brick dimensions have actually changed over time. Many people believe that bricks are all the same size but you will find that over time and even in modern bricks today there will be variation in the size of the brick. Certain types of bricks are simply manufactured at different sizes than other bricks.   As well, typical or common brick dimensions have been deliberately changed over the years. In historic times, the average brick was approximately ¾” to ⅞” of an inch longer than a modern brick.   This difference can be painfully obvious when amateur masons are trying to fill in openings in historic walls. A lot of times they will “cheat” their mortar joints to make each mortar joint larger than it should be but this is an unprofessional way of building or renovating. Professional masons can use salvaged historic bricks to infill historic openings. That type of accurate historic restoration work comes at a much higher cost than amateur work but the difference is notable.   Brick dimensions were reduced over time, for the purpose of ease in mathematics in takeoffs and quantity surveying.

The other big reason for variation, within bricks made at the exact same time, even in the same batches was due to variations through the brick firing process.   Using historic beehive killings, for example, it wasn’t possible to heat or fire bricks and even temperatures at all parts of the kiln. In fact, there was great variation between individual cubes of bricks and throughout the kill itself. Additionally, hydraulic Equipment and heavy machinery had not yet been invented so much of the sifting and separating of substrate clay materials was done with animals and human labor.   As a result, historic common bricks were made with earthen materials that varied greatly even within individual bricks.   Clumps of mud, air pockets, organic materials, and even stones would get mixed into the plug and later into the actual brick mould sets.  This resulted in bricks that would twist, shrink, and even expand a bit in the firing process.

Brick bats were used to resolve the limitations of wall spaces,  and fill voids of less than a full brick width.   Brick bats are custom cut, normally on site, to fill the exact space requirements of the remainder of the masonry course. In the photo below you can see an example where the brick bats near the end of alternating courses are highlighted in yellow to show the smaller sized bricks. 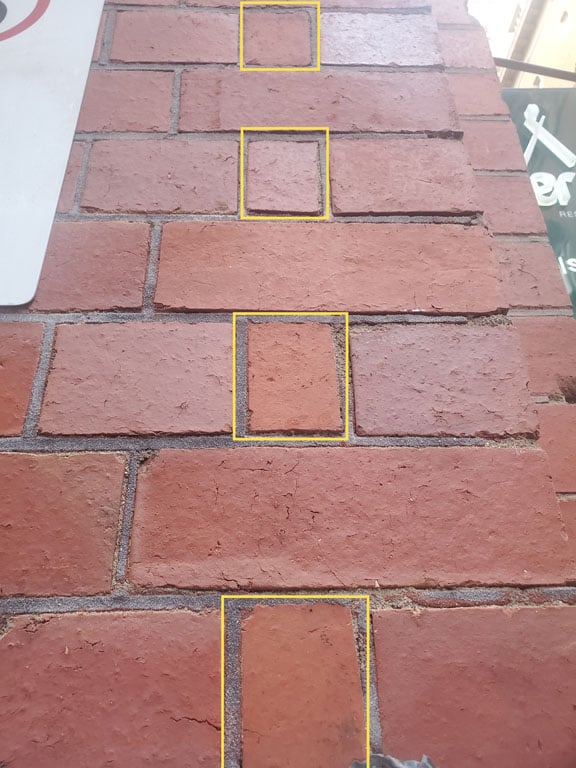 Here we are talking about the 2 main types of brick bonds in historic masonry, but other brick bonds exist and are used often in masonry brick construction. In the previous article we talked about the running bond and the common bond. There are also many others which are less common but still options for decorative and ornate purposes.. The picture below shows an example of a mosaic bond, above the window header.  It is a rare bond, but can be seen from time to time in historic masonry.

This article is part two in a series covering masonry brick bonds. Following articles will continue to explain the principles of masonry restoration, tuckpointing, and maintenance and upkeep of historic building construction.