If you look closely at historic brick masonry walls, in Washington, DC, you can often see areas where windows and doors existed, in the past, in the brick facade of the building. In some cases you can see that newer brick has been installed to fill in those locations and remove the original doors and windows.  We call this a brick infill.

This type of reconfiguration often happens in concert with interior wall layout changes.   For example, if a former layout allowed for doors entering from the exterior to one unit or room of space and now that room and/or associated partitions conflicts with the original door or window layout, an architect or building owner may choose just to remove the door or window and infill the opening with new brick.    It’s not necessary for structural purposes, but for a more consistent aesthetic, in many cases historic bricks can be salvaged and used to infill where they will be closer to the aesthetic of the original brick. Because of differences in methods of fabrication, and age of the brick itself and the mortar, it’s often near impossible to match perfectly between old and salvaged brick.   Nonetheless, sometimes with additional work and cost, special brick and mortar can be procured to be close to a match to the original.   This consideration is not generally a part of brick restoration and historic lime mortar tuck pointing, except in cases of spot repair.   Spot repair is generally a makeshift alternative to wholesale tuck pointing. Spot repair will generally focus on an area or range limited to few locations and be very reduced in size or scale to focus only on the most critical areas of concern. Spot pointing is not always recommended, especially when the age of the remaining brick mortar is older than the expected useful service life.

In the following image you can see a historic brick masonry wall.   At first glance it might be hard to pick out and even discern and find the windows and door locations which have been replaced with brick infills.  The mason did a good job on getting a similar color mortar.  However when you get closer you can see the difference between the newer brick and the original brick. 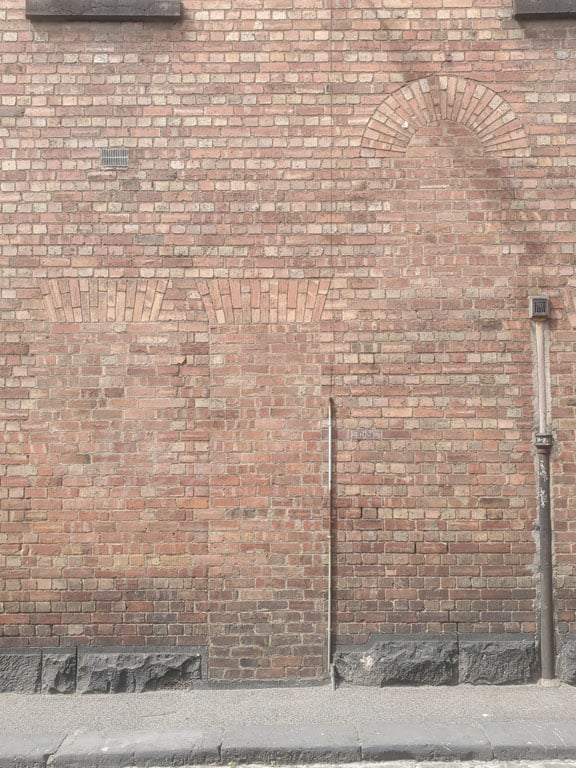 The image below has a pink line superimposed on top of the picture of the brick wall showing the locations of the new brick infills.   If brick infills are built well, with good quality, in some cases such as the example below, you can barely notice the difference, from a distance. One detail that stands out is the remaining original aperture headers or opening headers.  The door and windows are gone, but the brick mason left the original headers in place. 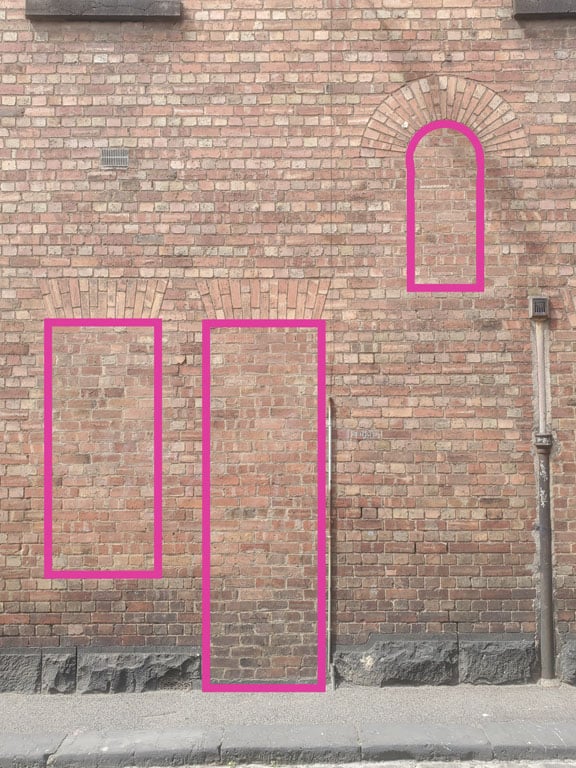 It is common to leave the door and window headers in place, even when the doors or windows themselves are removed. For the most part, the remaining original headers do not significantly detract from the brick wall aesthetic. The original purpose of these headers was to support the brick above the opening. Now that the new brick has been installed into the opening, that header’s structural purpose is no longer needed. Nonetheless, it doesn’t detract in any structural way to leave the headers remaining in place.  One way of looking at it could be that it makes more sense to leave them, not just because it saves the cost of removal, but more so, it allows for a provision to go back to the original layout in the future.

You can see a closer view of the brick joints, in the image below.  The mortar on the left side of the first image is from the original construction.   The mortar at the right side of the same photo is the new mortar used to build in the opening infill.  This newer mortar has more consistency and a finer aggregate and sand.   You can see the smoother surface. 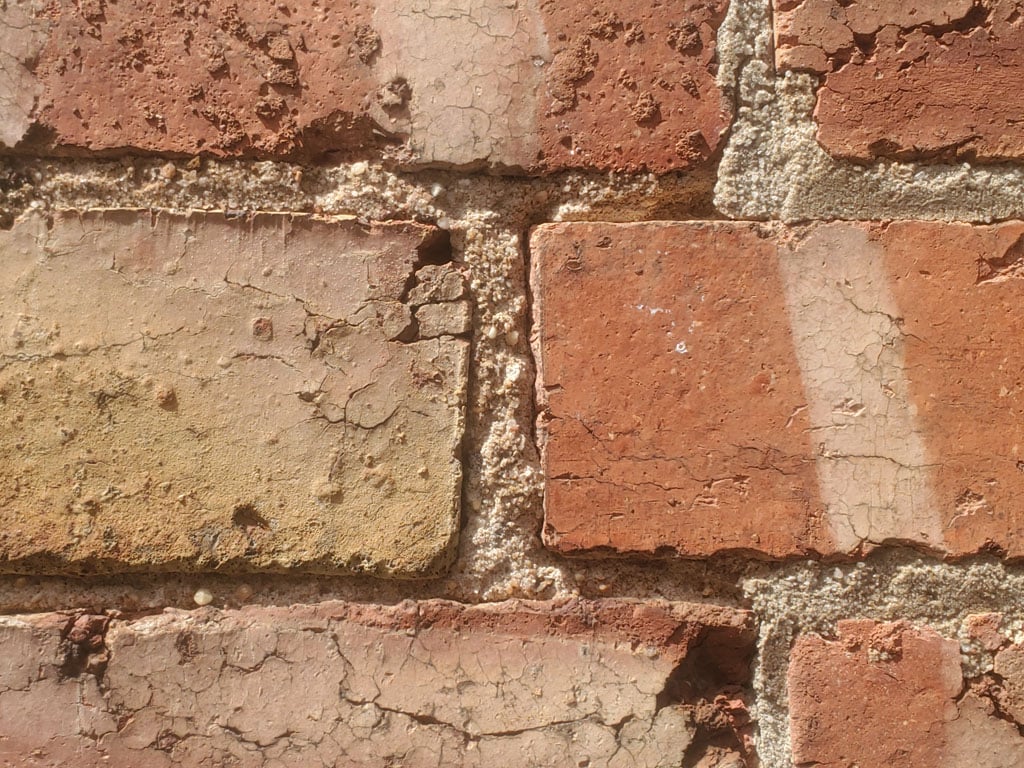 Another subtle but important difference is that the newer mortar has been installed closer to the outer surface of the brick face. That’s how the original mortar was also installed and if the whole wall was to be pointed, that’s how the mortar should be reinstalled. In the infill process they installed the newer mortar further out, closer to the outside face edge, than the old mortar and that it’s likely the best decision.

ure below is similar, but the picture below shows the older historic original, and older, mortar on the right hand side of the image and the newer lime mortar with finer aggregate on the left hand side. In this closer up picture you can see the difference even better.

The decision of how deep the mortar joint recess should be set, can be a tough choice, and after all it is a judgment call.  Overall though when the wall is to be pointed in a wholesale type approach all of the mortar, except for the infills, will be pointed and at that instance in time the mortar joints will be closer to flush with the outer face of the brick. Installing the new infill in the same type of way is a wiser decision, and for that reason at a upkeep and life cycle tuckpointing process, the new mortar will often be made to match the newer infill mortar. 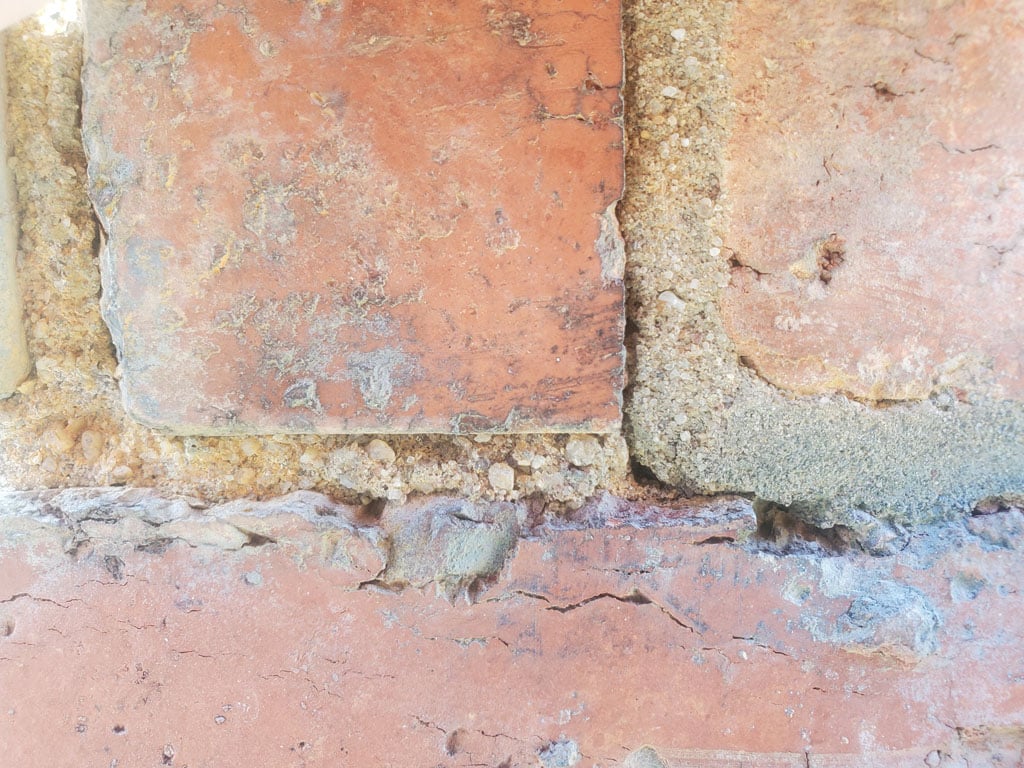 The image below shows the older mortar on the left hand side has a deeper recess. You can see a more pronounced and distinct shadow.   That older brick mortar has not yet been tuckpointed but will need to be pointed at some time in the near future. The reason for the deeper recess is not from restoration of the mortar, it is just from deterioration at the surface of the joint.   As the old and original mortar has deteriorated, the outside of the joint has lost its cohesive binder and the remaining aggregate and sand in the joint has crumbled away at the outer edge. 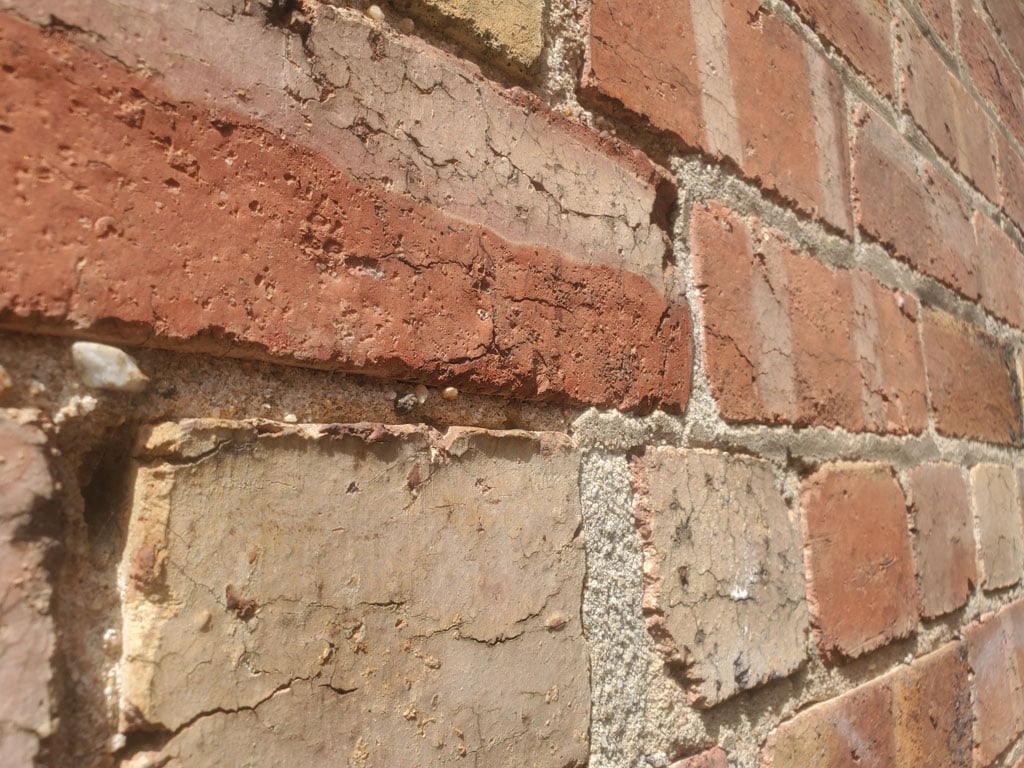 Two of the original brick headers are jack arches. They are not circular or semi circle or curved, even minimally, like segmented arches.  Instead they are flat, yet still rely on counterposed forces in compression to hold their position.   The picture below shows a closer look at one of the jack arches. 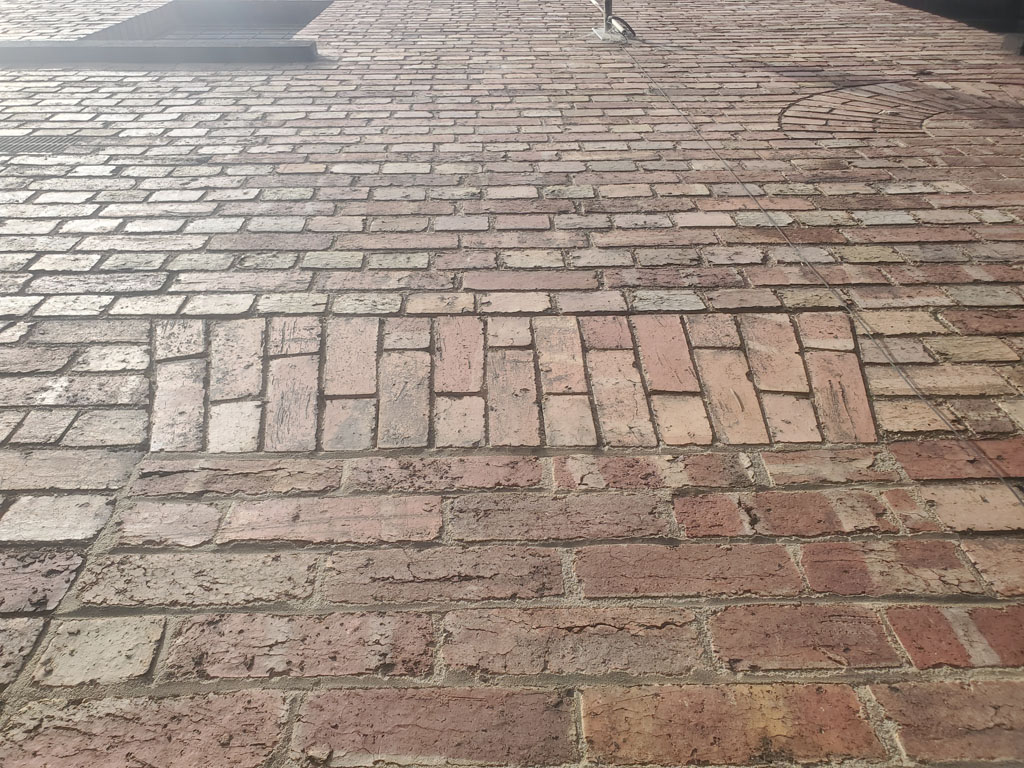 The photo below shows the Roman arches, up close.  The Roman arches use slip bricks, in this type of configuration as voussoir bricks, which are cut in a tapered shape.  This tapered shape allows the brick header to be built in a structurally loaded compression assembly, essentially wedged into a self-supporting shape.

(Jack arches, just like Roman arches, can also be built with slip bricks, but in this case the brick in the image above, the header ends are cut at angles but the brick stretcher axises of the bricks are not tapered to be actual slip bricks or voussoir bricks.) 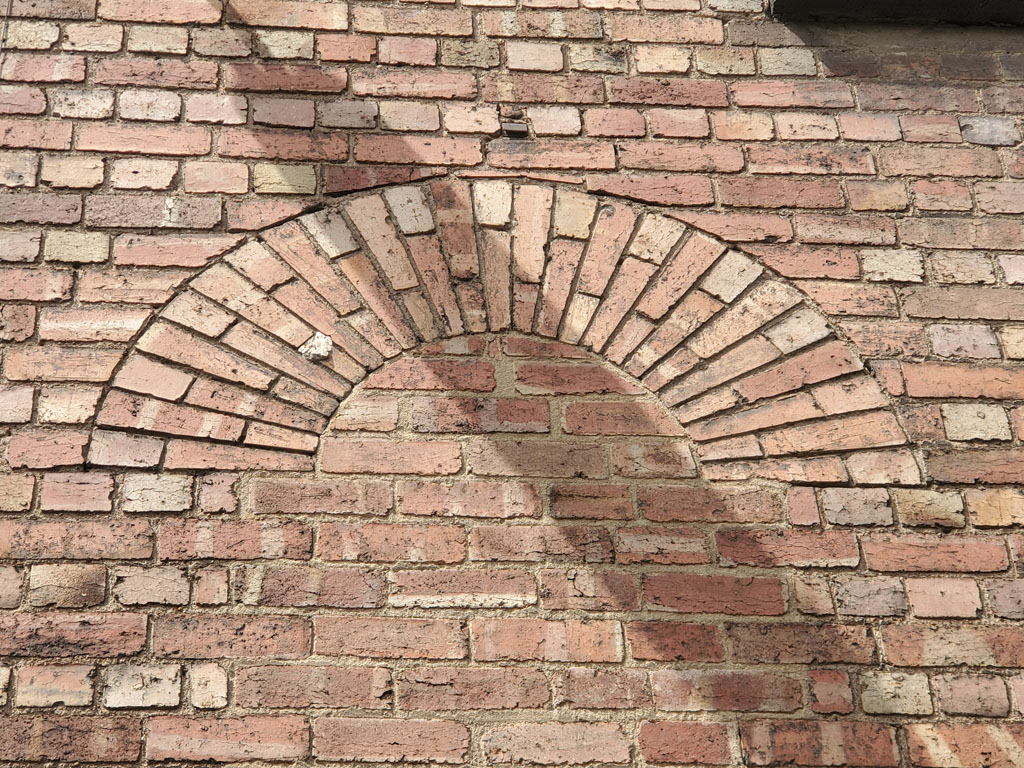 If you look very closely you can tell that the brick mason took one shortcut in construction of the infill below the Roman arch. The brick spacing between the springer areas of the Roman arch has changed from the original layout. 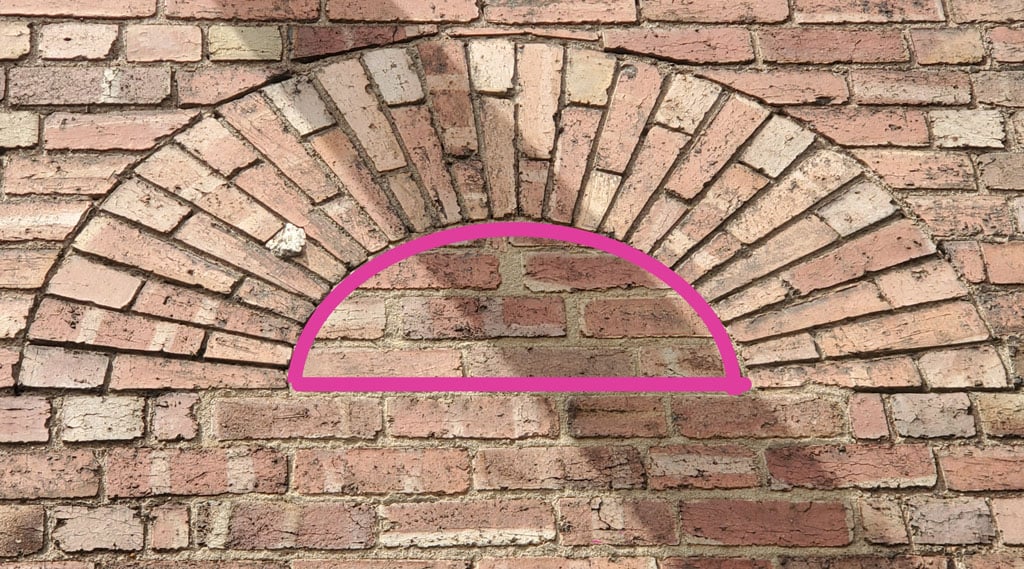 In the photo below, you can see another opening which has not been infilled and is still left open to allow the original doorway to function as intended. Looking closely, you can see that the bricks at the underside of the arch are much smaller in width than the same bricks at the upper areas of the archway. These bricks are tapered and therefore are classified as slip bricks or voussoir masonry units. 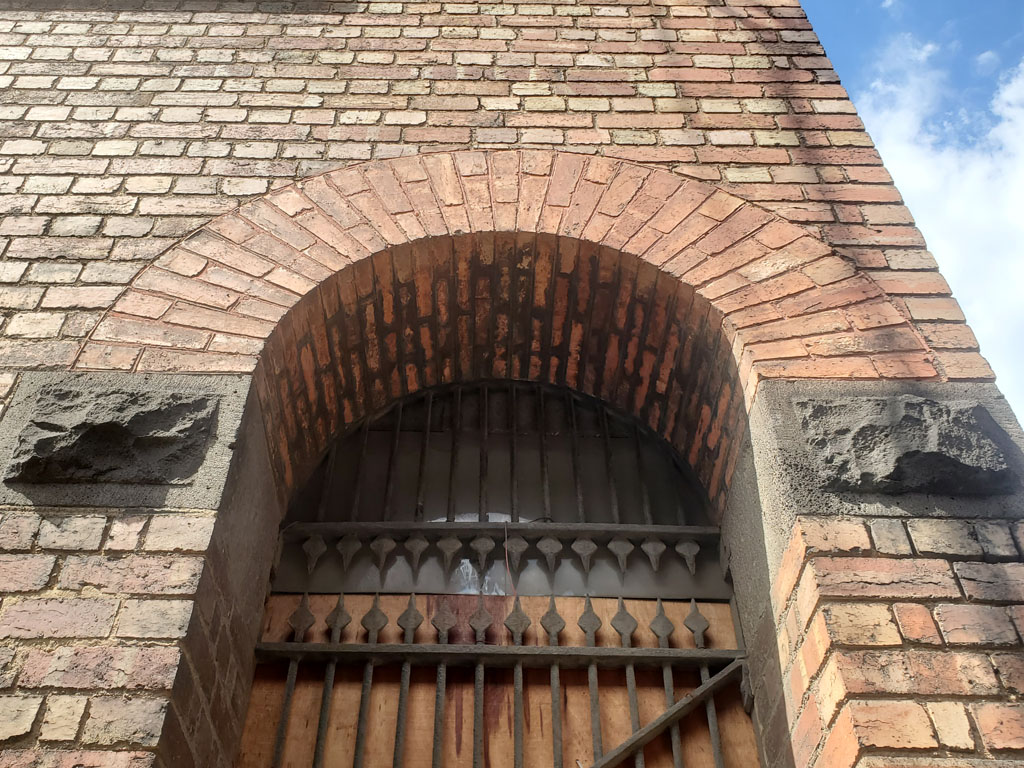 If you look really closely at the first picture in the blog post, you can see that the brick layout used for the infills is different from the original brick bond. The original brickbond is an English bond. Essentially, in an English bond courses alternate between a header course and a stretcher course.   However in the infill area the more modern mason switched to a running bond. The running bond is one of the simplest, and therefore cheapest, of all bonds. To make the running bond fit within an older and constrained layout, on each side of the infill that was already constrained by an English bond, the mason used quarter closers.   Bat closers are very common, they are essentially bricks that have been cut in half. Quarter closers, on the other hand, are less common but similar. They are bricks that have just been cut down to approximately one quarter of the typical width.

The practice of using a single partial sized brick, per course, for fitting the entire course together within a constrained dimension is extremely common, it’s an everyday type practice in historic brick masonry.   The image below shows a close up view of the area of infill. On the right hand side we have taken the same image but overlaid the area of the quarter closer with a pink color to highlight those areas where quarter closers were used. 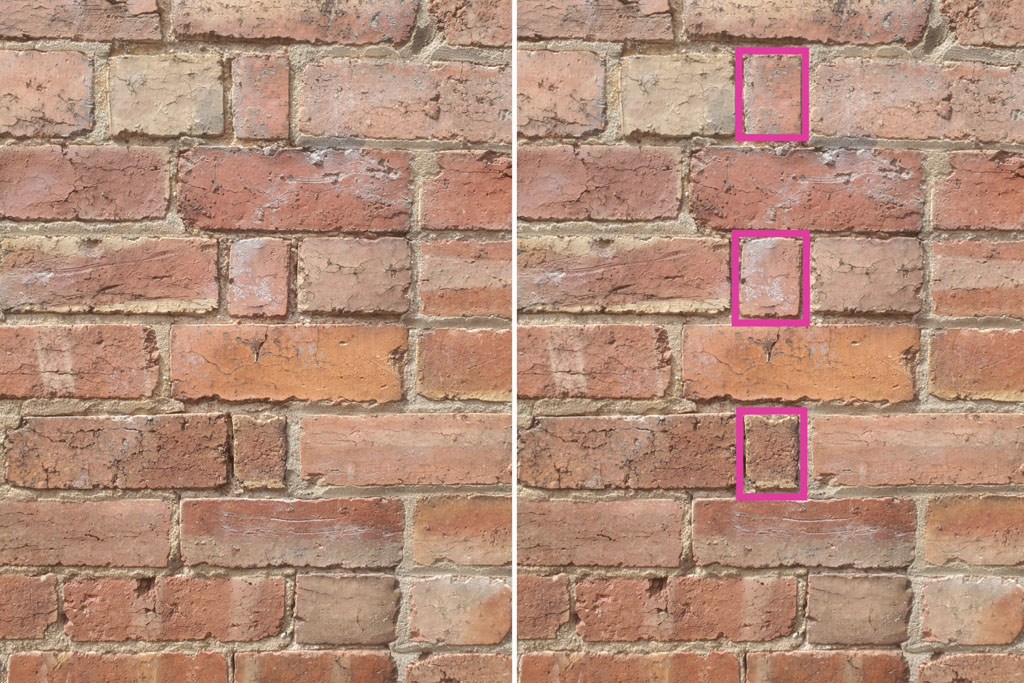 Modifications to historic masonry walls are a part of modernizing and / or changing an interior configuration or exterior layout to better fit the modern use of a building.  In this article we talked about the following terminology and  concepts, follow the links below for more related information from the IDS website: