Most historic buildings in Capitol Hill, Georgetown, and Dupont Circle and other parts of Washington, DC are built as joined or attached buildings. The buildings join each other at the shared property line. In many cases the demising walls are shared between buildings and in other cases buildings are built directly against the exterior walls of adjacent buildings. In those two different cases, there will either be a shared wall or wall built side-by-side. In each case, conditions are similar but different. A third type of scenario exists when a building wall is built next to but not attached or joined to an adjacent building. In such a case there may be an interstitial open space. It’s the least common of the 3 scenarios described so far. But there is a 4th scenario that should be considered, the most common building layout in America: unattached or detached freestanding buildings. That type of building, ubiquitous in the rest of America, is somewhat uncommon here in our urban DC neighborhoods. Altogether, the four most common types of building exterior wall assembly methods, at property line follows.

The4th scenario is the least common, but the problem with the 4th and final condition listed is that that small interstitial space is generally almost completely inaccessible. The construction industry has special rules related to confined space, but in this case, even with the best intentions, there is no way a human body can fit within the space.

A collage of 4 pictures of an open yet inaccessible interstitial building space follows below. From the top left to the bottom right the images go in sequence from farther away to closer. From a distance the 2 buildings look like they’re almost regular joined row buildings. However, up close you can see that there is a 4″+ space that separates the 2 buildings. 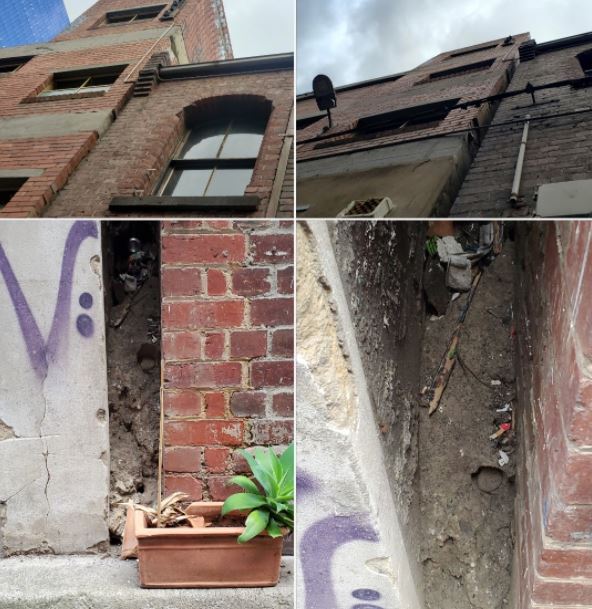 This type of open yet inaccessible interstitial space is problematic, for several reasons, but first It’s important to consider why such a condition even exists.

Over a 100 years ago when these lots were first developed, builders would commonly build group’s of 3 to 5+ houses. However, a typical city block can fit up to over a few dozen thin buildings, such as the common rowhome. So, a developer would often pick up and begin building where their lot began next to a recently built group of new buildings, where the last builder finished. Years later then when developers developed that lot next to older buildings, they would have to start fresh. The same condition applies if a developer of a building stops short of their property line. In such a case,
the next builder could not join the neighboring building because they would have to cross the property line onto the side which did not belong to them.

In a scenario like that, they may place the bricks of their exterior wall as close as they could to the existing building. In almost all cases, in packed urban environments, builders, architects, and building designers want to enlarge the building footprint by using as much space allowed depending on FAR and setback requirements. The wall may still remain unattached though, for the reasons described and also in some cases to allow a small space for hand to fit while placing the bricks in the newer wall. In the case of the image below, the space is so small that it never allowed for the joints on the outer side to be struck or finished. 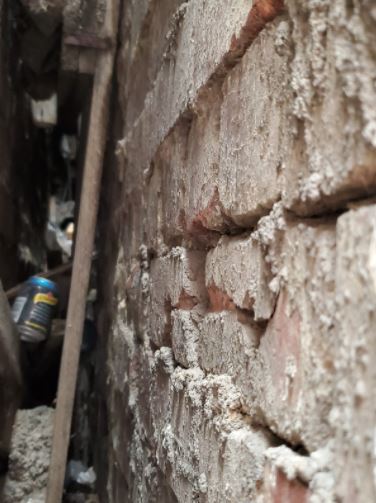 Water Can More Easily Seep In

The partially open and unstruck joints in the photo below are problematic because they allow water to sit at the horizontal edge of the brick facing, that opens space of the joint will allow water both to pool, drain inwards, and permeate.

Above, we mentioned that this type of open yet inaccessible interstitial space is problematic, below we discuss several reasons why an open space like this is problematic.

When it rains or when there’s any type of precipitation, that precipitation just enters that interstitial space unimpeded. However, that’s even more problematic because the water cannot just freely drain away through a graded surface. The resultant moisture is then sitting in a tight valley of space where the sun mostly never enters. That means that water in this area will dry out extremely slowly. Building facades and almost every part of the building which is exposed to precipitation and moisture without an easy method for drainage or drying, are essentially exposed to conditions of accelerated deterioration. As water enters and does not dry, materials stay wet for prolonged periods and therein are exposed to conditions of accelerated deterioration. Almost all building material types are negatively affected by water or precipitation to some extent. Moisture is one of the top building degradation factors. Yet natural materials are often affected more significantly than synthetic materials, but in either case it’s almost consistently the same that exposure to moisture or wet conditions without the ability to dry is a negative condition for buildings and building materials. 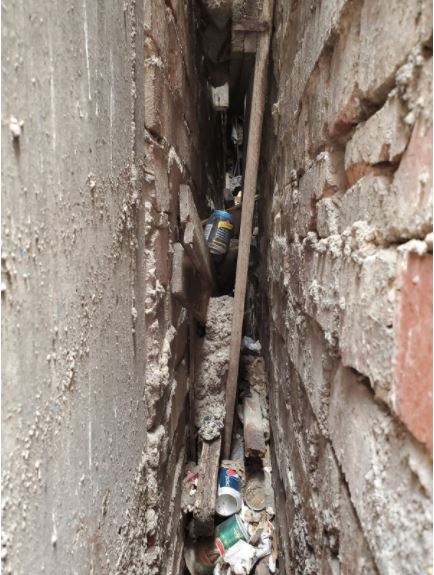 Since the wall conditions cannot be accessed from the external side, there’s no way to maintain or even observe the conditions of the partition. Where joints begin to fail, these areas cannot simply be tuck pointed and maintained the way a typical building exterior would be maintained and serviced by a masonry contractor over time. As a building assembly of this type accelerates or deteriorates at an accelerated pace, it becomes a weak link in a building’s long term physical viability. Before complete or system wide failure, there will be extensive nuisance type problems of water entry and interior deterioration caused from exterior openings and exterior deterioration. In simpler terms, essentially, areas of deterioration at the outside of the building will lead to rot on the inside of the building and this will be a nuisance and a hassle for years or decades before the building suffers from complete failure or collapse of bearing wall systems.

Another problem associated with the same issue of interstitial open space between buildings is that materials get into that space and cannot be easily removed. In the picture below, as you look close you can see that there is a mound of sand, cement, trash and plants growing in that area. The problem with these materials in this interstitial space is that they cannot be removed and they are essentially physically functioning like a pile of dirt. It’s bad to have a pile of dirt against an above grade masonry wall. Especially in this type of scenario, if that wall is not waterproofed on the exterior than the permeability of dirt (or in this case, maybe trash), leads to increased moisture against the wall which leads to accelerated deterioration of the mortar joints and brick. Yet when precipitation enters that pile of trash, that pile of trash stays wet for weeks and even months, like a sponge, holding through capillary action and releasing through wicking. Over time, as precipitation cycles pass through any area regularly, including Washington, DC, that pile of trash stays hydrated and therefore leads to constant moisture and hydration against the exterior wall of the building. Since the mortar joints at the exterior wall of the building are not properly struck and therefore not properly finished, they do not do a good job to keep water out. As those poorly finished mortar joints, essentially, through capillary action work to suck water into the building, the entire wall system slowly deteriorates.

Building in the space now, as it should have been from the beginning is not easy, but there are a few options and methods to treat the open and inaccessible interstitial building space. A few examples follow: 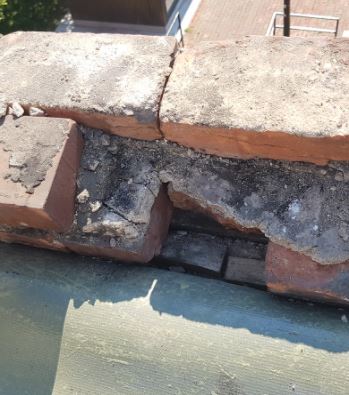 From a conservation and preservation perspective, several approaches can be taken to improve conditions related to exterior masonry facades and rooftop openings between close built walls with open interstitial space. Primarily, waterproofing elements at coping and flashing should be installed and inspected and checked on a routine maintenance schedule, either seasonally or at least annually. If coverings are kept in good condition, the life of facade and exterior masonry building wall elements can be significantly extended. The slow yet insidious damage associated with water entry into unstruck mortar joints can be mitigated. Hire a professional contractor which specializes, understands and appreciates historic construction elements and buildings.

In this article we talked about the following terminology and concepts, follow the links below for more related information from the IDS website:

These concepts are part of the fundamentals of historic masonry restoration, tuckpointing, and brick repair, waterproofing, and flat roofing.