The pictures below show a common and sad story: historic brick masonry architecture built over a 100 years ago where the common joint bricks are classic but nonetheless damaged over time with deteriorated mortar joints, recessed beyond tolerance and lacking sufficient moisture resistance. Our company is in the business of proper historic masonry restoration and tuck pointing. In the discussion below we talk about some of the characteristic problems of historic masonry which necessitates proper pointing and repair and we talk about some of the shortfalls inherent in corner cutting through improper pointing. 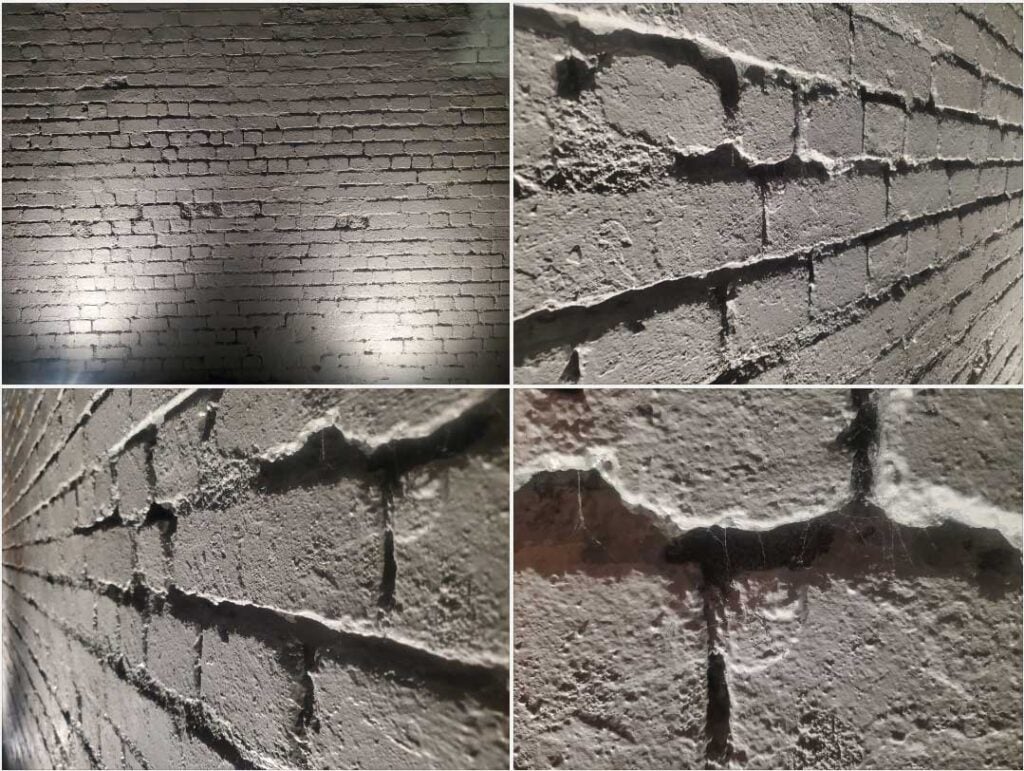 Walls built over or about a 100 years ago were generally built with kiln fired clay bricks and lime mortar. The clay bricks are soft compared to modern high temperature fired bricks. Bricks in the old days, several generations ago, were fired by historic methods at lower temperatures. Those bricks are therefore techically softer and are therefore more prone to moisture permeability. That doesn’t mean that historic brick walls don’t do their job to maintain the structure and weather-tightness of a building. They do just fine, but at over a 100 years of age they will require maintenance and repair.

Modern motors are hard and impermeable. By comparison, historic mortars are softer, not in the way we think of softness but on a scale of pounds per square inch of compressive resistance, historic bricks can be less than half of the compressive resistance then modern bricks. They are still hard and strong, by all means, but not hard in the same terms orlf vitreousness and brittleness.

Historic lime mortars were also similarly softer and although physically, perceptively hard to the touch In most cases, they do not have a similar lower compressive strength. Also historic mortars allowed greater permeability of moisture and water. That sounds bad but they can do a fine job of keeping out the weather in this region.

Over decades of exposure to the elements, rain and precipitation and freeze and thaw cycles, even the brick mortar of well built historic walls can begin to lose it’s cohesive strength. The lime binders begin to deteriorate, and the aggregate sand becomes loose. Particularly, lime mortars will deteriorate over long periods of time. In some cases lime motors have maintained integrity for over a 100 years but are now, today, at the point where they need to be repointed. Brick repointing is the process of removing and replacing the old and deteriorated mortar between the bricks.

The removal process is called raking. Joint raking involves using manual tools or carefully using powered tools to score and remove the old mortar. In many cases even worn and deteriorated joints will not be easily removed. It often requires serious force. Joints should be raked to a depth of at least 3/4 of an inch. In some cases, the worn or deteriorated area will be less than 3/4 of an inch yet the joints still should be raked to a depth of no less than 3/4 of an inch. In common joints, this dimension is important. Common joints normally have a width of approximately 1/2 of an inch. For proper adhesion, not just to the substrate mortar but also to the brick edges at the bed area of the joint, the depth of fre quarter is of an inch is a minimum standard. Joints can be raked even deeper than 3/4 of an inch but to maintain stability of the wall, joints should be raked no more than approximately 1.5″ in depth.

Then once the worn mortar has been removed, the remaining substrate motor and adjacent brick surfaces will be cleaned and hydrated. New mortar, mixed to a historic specification, will be installed in sequential lifts with a stipple and pointing process. Proper historic mortars are often custom created to provide a low compressive strength, proper modulus of elasticity, and compatible permeability.

In the photo below you can see a an example of a wall which has been spot pointed with an improper mortar. Not only has the new mortar been applied in a sloppy and amateur looking way, it can also damage the bricks when tucked between adjacent brick bed joints and perpend joints.

The dark grey mortar is a Portland mortar. Portland cements, as opposed to lime mortars, are harder than acceptable and have a higher degree of impermeability. Impermeability sounds like a good quality but in historic walls it’s actually bad to the extent that it can be detrimental to the wall. Using a Portland mortar instead of a properly mixed lime mortar can trap water in the interior space of the wall which will lead to a buildup of excessive moisture.

In the following pictures below you can see more examples of the same condition where an otherwise serviceable and well built historic brick wall could have simply been pointed correctly. However, the wall was instead further damaged much more significantly by improper pointing.

Excessive moisture, in other words build-up of water, can lead to ice in freezing cycles. Freezing water expands in size with extreme force. That extreme force can lead to damage of the bricks, to the point that the brick face can shear and fracture. 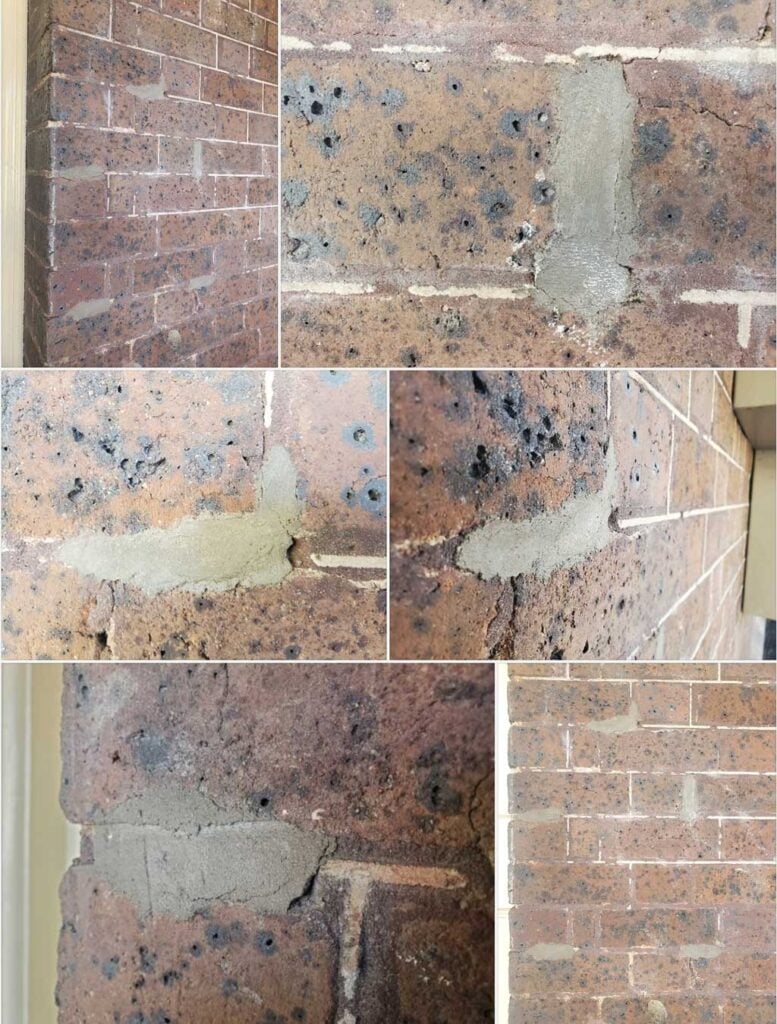 We recommend keeping amateurs and unprofessional contractors far away from your brick. Don’t let them anywhere near your building. If they go and do work like this, it can cause much more harm than you can imagine. If you have questions about your building call a professional contractor such as IDS and feel free to have a dialog and open conversation with our company.

From a conservation and preservation perspective, several approaches can be taken to improve conditions related to deteriorating historic masonry and brick mortar joints. Primarily, historic brick and masonry should be inspected and or checked on a routine maintenance schedule, at least annually. If mortar is kept in good condition, the life of historic buildings can be significantly extended. Hire a professional contractor which specializes, understands and appreciates historic masonry construction elements and buildings.