The Early History Of Bricks

Brick has a history nearly as long and interesting as the history of human civilizations.  It is fascinating that early civilizations across the globe used bricks.  Masonry brick is considered the first man-made building material.  Brick shows up in historic ruins from ancient civilizations thousands of miles apart with no cross-pollination or communication between the isolated and separated civilizations.  Ruins of brick have been found, from constructions over 10,000 years-old.

Parallel Invention or Multiple Invention are theories that humans including engineers and scientists can invent similar things in similar times in isolation from one another, as has happened many times in history.  Some examples include the development of agriculture and written language.

As it seems like an impossible coincidence that people separated by thousands of miles of land and sea created brick independent from one another, it’s also not that complicated.  Brick is a relatively simple material.  It’s a slight oversimplification, but brick is basically just clay that has been shaped and heated at extremely high temperatures.  Clay is a type of soil found throughout most of the world, naturally.  Soils right here at home in Washington, DC have high clay properties, at many locations.

Soils used for bricks are often very high in clay and have low amounts of sand and organic materials.  Clay is a fine silt material.  Organic materials will burn in the firing process and sand granules do not stick to one another.  By comparison, the silt particles of clay loosely bind to one another to allow clay to have a plasticity, meaning it can be shaped and molded.  Common bricks, so often found in the side and rear walls of our DC rowhomes are form shaped, similar to pressed bricks but without the higher levels of pressure and, most importantly, without highly selected and sifted clay substrate materials.

The earliest uses of brick have mostly disappeared from evidence in historic ruins.   Adobe is a material similar to brick however is unfired.  The firing process of brick involves heating clay in a brick kiln or fire to the point that it becomes semi-vitreous.  Vitracation is the process of heating silica materials to the point that the individual particles synthesize to become fused or bonded together.  For example porcelain becomes impermeable through vitracation.  Brick has a degree of vitrification, achieved through the firing process.  This degree of vitrification improves compressive strength, impermeability, and durability at the wear surface.   By comparison, adobe, while strong enough to support limited scale building structures, lacks impermeability.  Therefore, adobe is highly susceptible to moisture and environmental weather conditions.  In dry deserts, adobe structures can last for centuries.  However, the amount of adobe structures from thousands of years ago is very limited.

The images below show examples adobe masonry drying in the sun and a wall built with unfired adobe brick. 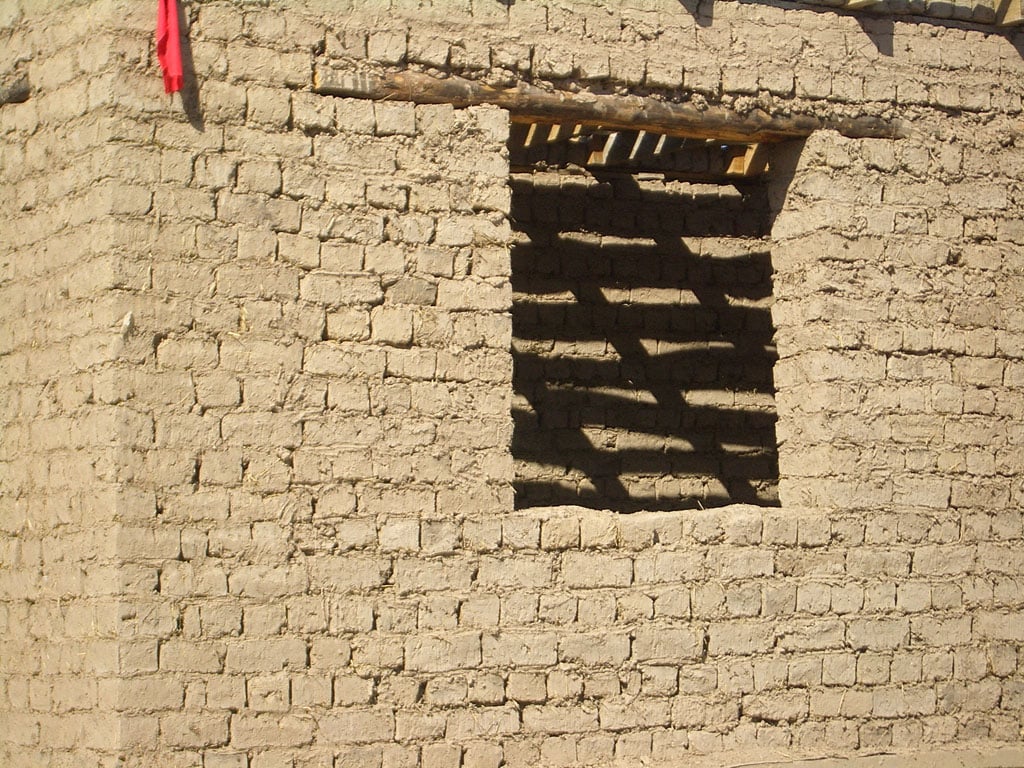 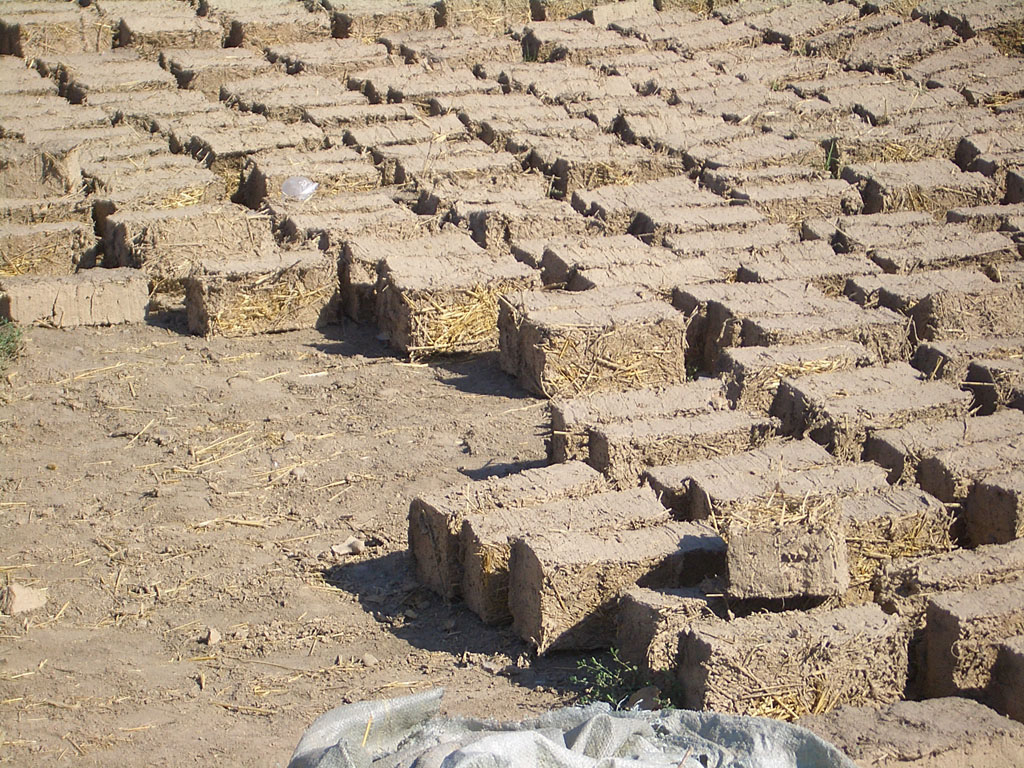 Homes and buildings were built with Adobe masonry just like the modern brick made with historic methods in the pictures above, for thousands of years.  Around 10,000 years ago; however, human civilisations started learning how to fire bricks to increase strength, permeability, and longevity of the masonry.  This was the birth and invention of brick masonry.  Although technology was invented thousands of years ago, it has continued to improve.  In fact, the historic brick buildings of Washington DC including the neighbourhoods of Capitol Hill, Georgetown, and Dupont Circle, are built with bricks that are over 100 years old and at a significant disadvantage to bricks made today with modern technology.

Some of the differences that evolved in the manufacturing of bricks in just less than 100 years include the following:

Processing and filtering of substrate materials

Historically, brick substrate materials were processed by hand or through the labor of animals.  The materials from which bricks are created are extremely heavy.  Sand, clay and mud, for example, are very dense and therefore heavy materials. These materials are onerous to lift and move and it is hard to sift these materials just using livestock and human labor. By comparison, today we have diesel and gas combustion engine driven equipment that can lift thousands of pounds of materials at a time. Some of the equipment used in brick manufacturing has literally thousands of horsepower. This equipment and technology is essential to modern processes and was not available even just 120 years ago. 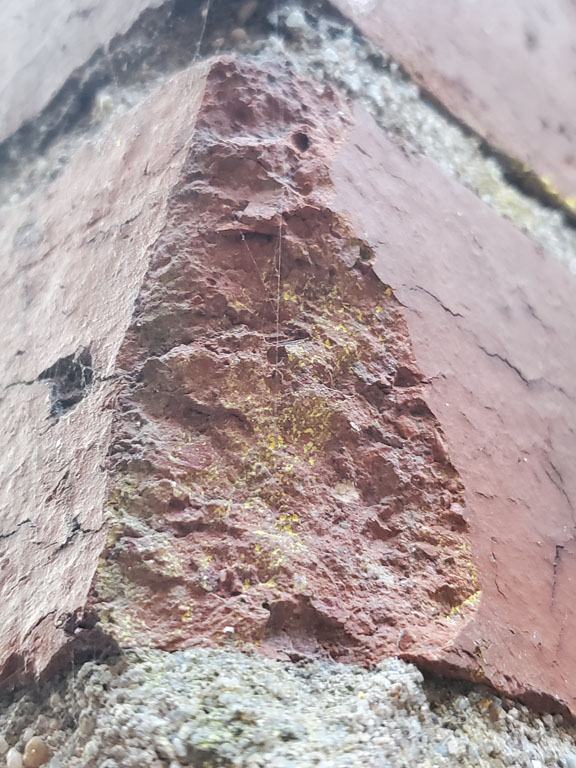 A close up picture of this failed pair of bricks also follows below for a closer view.   This picture shows the large granules of substrate materials from which the brick was made. Modern bricks have substrate materials which are filtered at a much finer level of granularity. 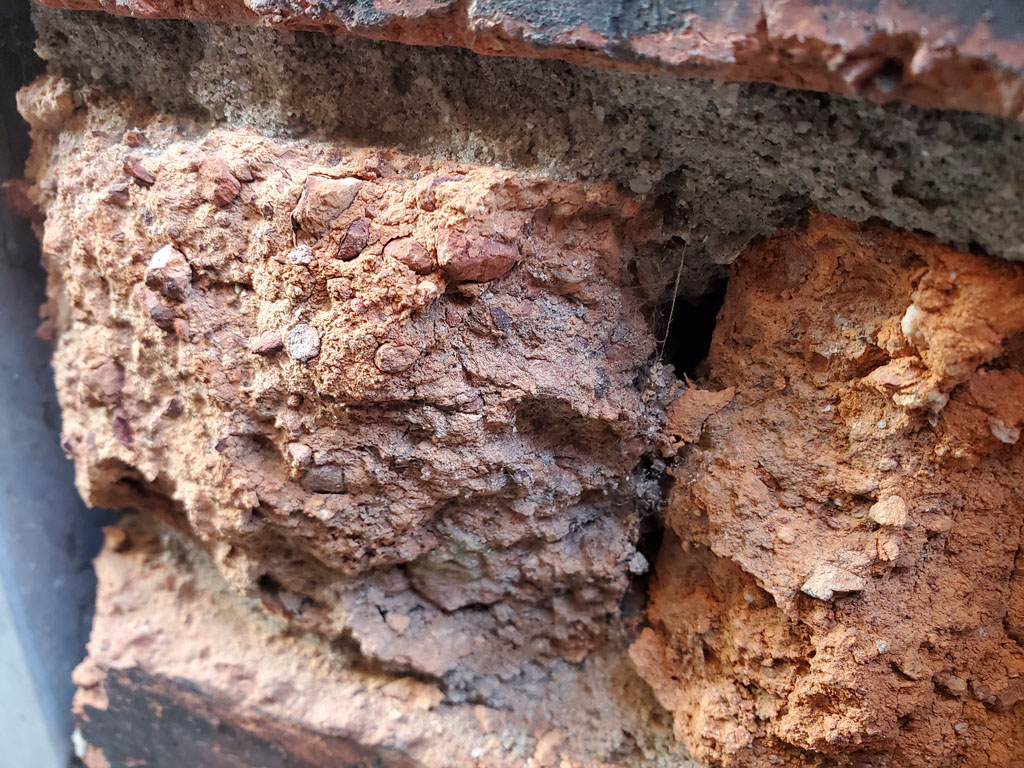 Bricks fired at a higher temperature have a higher degree of vitreousness. The optimal level of level of vitreous nature can be reached at about 2000ﾟF. However, in historic times brick kilns used organic materials as the source of fire and heat.   Oak wood was used in some cases because oak burns at a high temperature and the potassium in the resultant combustion created vapor would give a distinct purple color to the bricks. Particularly in decorative Flemish bond brickwork, you can see the header edge of the bricks which appear to be different color then the stretcher facing.

In the picture below you can see an example of a wall Built-in the Flemish bond. The bricks alternate between a stretcher facing and a header facing. The shorter width facing is called the header facing. In this case you can see that that facing has a darker blue color, due to the oak wood firing fuel source. 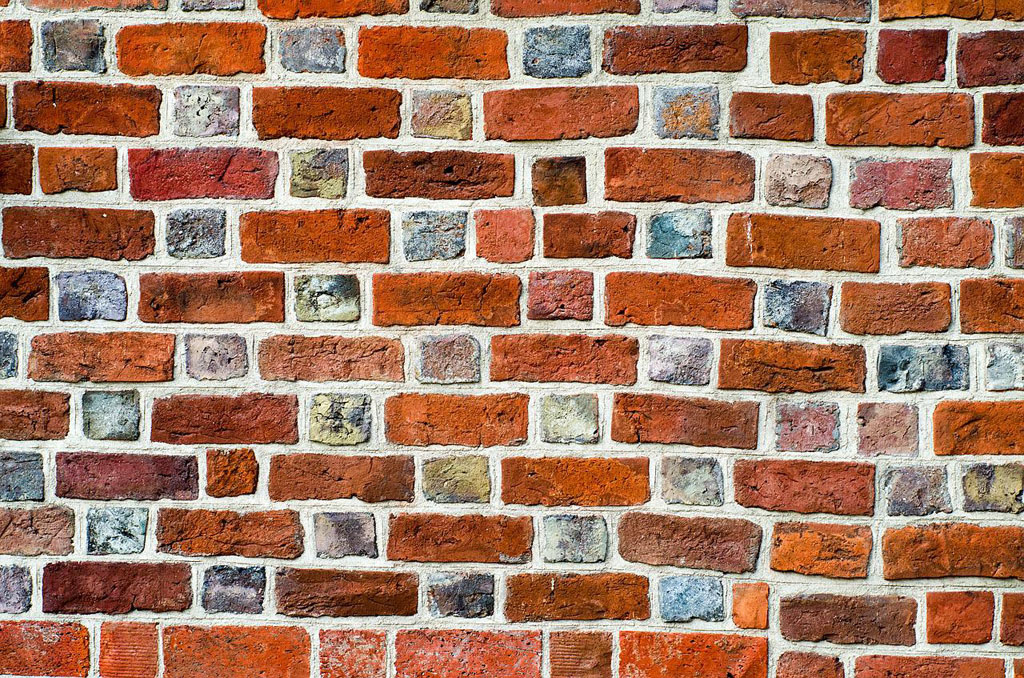 In the picture below you can see an example of a historic brick which although historic by modern standards is more modern and newer than the historic bricks used to build the buildings of Capitol hill, Georgetown and Dupont circle.

At a glance, you can see a few differences about this brick, in comparison to a historic brick from over 100 years ago. This brick has a more consistent exterior face than common bricks This brick also has a frog which is a recess in the bed facing, not intended to be exposed in the case of this type of brick.  For context, this facing would be exposed in a sailor or shiner brick facing. 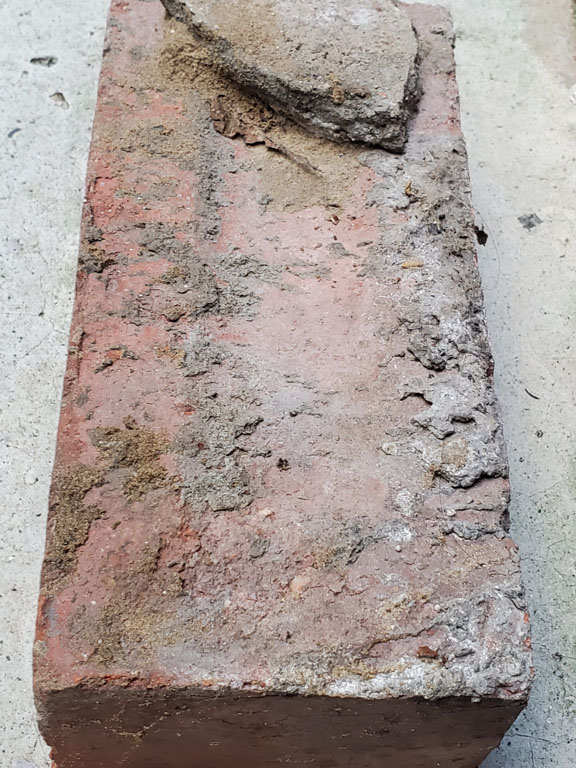 In historic times bricks were stacked into square brick cubes. Those cubes then sat on the floor of the kiln and the hot air of the firing process of the kiln circulated around each cube of brick. In today’s firing processes conveyor belts run through through the fuel source areas and can process thousands of bricks in a continuous motion That allows the bricks to be fired very evenly. In historic times, by comparison, bricks were fired very unevenly because the outside of each cube would get very hot but the bricks the center of each cube would get very hot while the bricks at the center of the cube remain comparatively cool and not reach the same level of vitreous conversion or transformation.

The bricks at the center of the cubes which did not receive sufficient heat in the firing process can later crumble. One of the biggest problems with this type of defect, born at the initial stage of brick manufacturing, is that the signs of the problem will not appear for decades after the brick was made and installed.

In the video below you can see an example where a brick face has spalled and the remaining substrate of the internal portion of the brick is crumbling, it is so deteriorated that the center of the brick falls away simply when lately touched with a fingertip.

Another point of distinction about production and manufacturing of historic bricks is that modern bricks are all created with high pressure on the slug material. The slug material is a high plasticity extrusion of clay, still in wet form, which is fed into the mould and wire cut, in most cases.  When pressure is applied to the slug, pockets of air are removed which leads to higher brick strength.  The picture below shows the exposed inside of a brick which has lots of air pockets. 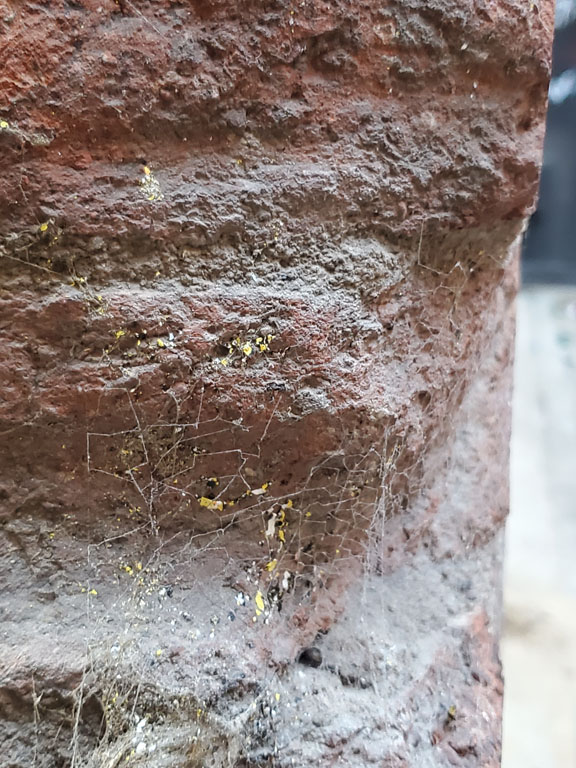