Brick, both modern and historic, is made from clay, very similar to mud.   In modern circumstances, that clay is dried and then ground and filtered and then rehydrated and mixed, then formed into plug.   Plug is a mass of clay that is similar to the shape of bricks but a long extrusion of material from which each brick is cut.

Modern brick is then put into a conveyor and cooked cooked or fired at a high temperature over 2000ﾟF. Historic brick by comparison was also fired but instead of being fired on a convertible, the convertible, it was fired in a kiln. Historic bricks from which the majority of DC rowhomes and DC buildings were built, were fired in beehive kilns.

Beehive kilns have a dome shape which help convey the heat To balance the distribution of heat to all areas of the kiln. However, by comparison to modern techniques and modern technology, the historic beehive kilns were very ineffective at evenly finevenly firing bricks. Because of this uneven application of heat, not all bricks would be sufficiently fired, within every batch. There was significant inconsistency. On the opposite end of the spectrum some of the bricks would be cooked at such a high temperature that they would become vitreous in nature and discolored. Generally the discoloration would go but go from a range of red up to a range of purple. Those “overcooked” bricks were called clinkers because when struck with a hard object they would make a sound similar to glass, indicative of their vitreous nature.

The picture below shows 3 different types of modern brick. Modern brick is similar to historic brick but harder incompressive or in compressive strength resistance, density,  More brittle, and more moisture resistance. These qualities and differences are due to the higher temperatures of the modern brick firing process and superior filtering of substrate components in modern hydraulic batch processing. 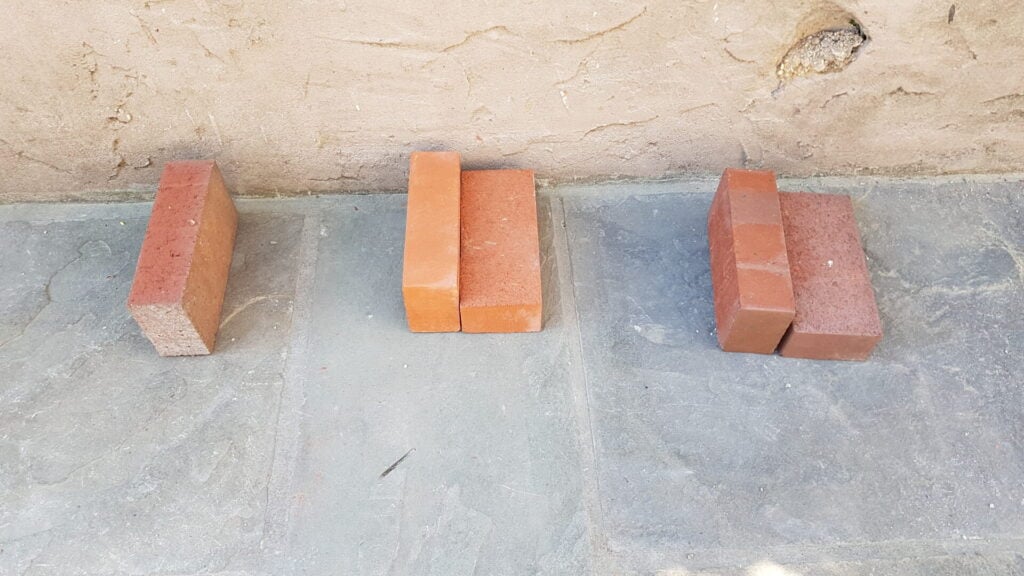 The article at this link includes more information about the weather and environmental resistance achieved by higher temerature and evenly distributed brick firing methodologies, in comparison with historic technologies.

By comparison, a picture follows showing two modern modern pottery kilns, for reference. These kilns are small, with only up to 4 ft³ of available space. The kiln is heated by an electric heat source bit’s worse but the high amount of resistance thermal resistance in the enclosure helps evenly distribute the required heat.