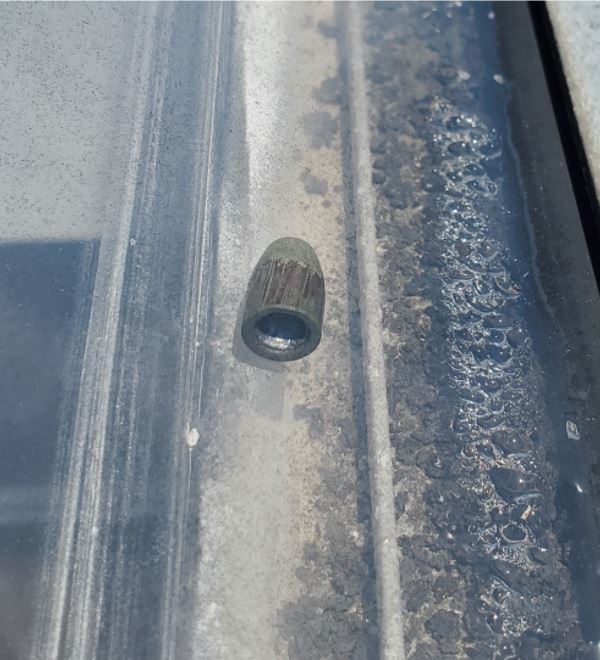 It is somewhat rare, but in the years that we’ve been working in Washington DC, specializing in historic masonry restoration and flat roof repair, there have been several instances where we have seen bullet holes through rooftops. We’re still surprised when we find a bullet hole through a rooftop or skylight. It’s not the sort of thing you expect. Customers will call us because they have a leak in their roof and they know we specialize in historic flat roof repair. We will go up there and search around the area of water infiltration finding problems or defects in the roofing membrane. Most often we’ll find delaminated overlapped ply materials or separation in rooftop flashing. But over the years we’ve seen over 3 different cases of bullet holes through roofs and skylights.

The first time we saw this, we were shocked. Based on the angle of the hole through the roof, we have deduced that somebody fired a gun into the air at a roughly 40-60°+ angle. Those figures are guesstimates, but there’s a logical set of reasons behind why that makes sense. If someone fired a gun at a lower angle, it wouldn’t have made it up to a rooftop, assuming the shooter were standing on the ground. If someone fired a gun from a more vertical angle, such as directly into the sky, the bullet would have come down in an almost directly vertical direction and would not have left an angle pathway at the hole.

When we do talk to people about this sort of incident, the first question they normally ask is how could this happen. Guns are prevalent in the United States, whether it’s terrible or not, guns are all over this country and also in concentration in urban areas like Washington DC. Although we are masonry restoration and flat roof repair specialist, not sociologists, some of the basics are obvious. When more guns are out there, more guns get fired. Sometimes people partake in what is called celebratory gunfire. If you have ever seen an Old Western flick, you know what we are talking about. When guns get fired into the air, those bullets come back to the earth. When they get fired into the air in a densely populated urban area filled with old buildings, those bullets will often come down onto or through the roof of buildings.

In the cases where we found bullet holes through roofs and skylights, the clients naturally ask us how long ago we think this happened. We don’t really know, but it could have been a long time ago. In some cases. If the holes is in a roof valley, ponding area of the roof, or in a high flow area of water, it will be much more likely to leak at a high volume, This concept of understanding roofing grade and level. The topic of rooftop grade comes up on our website in several places including the blog and also in our terminology encyclopedia. The quick take away is take away is that rooftops, even what’s known as flat or low sloped rooftops are never really flat at least they shouldn’t be built so that they’re

perfectly flat at any point. At all points in the roof system there should be some amount of grade. Essentially, grade is the angle to which something is unlevel. In many cases, even so called flat roofs, require a minimum of 1% to 4% grade. A grade of 1% is roughly equivalent to 1/8 of an inch over the span of one foot. Therefore 4% grade would roughly be a 1/2 inch of grade per linear foot. A grade of 2% happens to be a common minimum grade or fall, for many flat roof systems.

If you think about it in terms of rise and run, that means that in the case of a 2% grade, there is 2% vertical difference between the high and low area of a is a span of the flat roof of one horizontal foot.

Following that same example, at a 2% grade, if a roof is 50′ long then and perfectly consistent through the run of the roof, the high area of the roof would be approximately 12″ higher than the low end of the roof. In many cases, a grade of 2% should be used as a minimum standard.

In the picture below, you can see a bullet that went through a skylight. The bullet happened to be following at a speed close to a terminal gravity velocity. If it had been fired directly pointed at the skylight it would have gone through both layers of acrylic, but in this case it was caught the interstitial layer between the in the double glazed acrylic bubble. In a skylight, that interstitial area generally is not filled with regular air, instead is normally filled with a lower specific density gas such as argon. Argon has a better insulative nature than regular air which is made up of oxygen, hydrogen, nitrogen and some other chemicals. By comparison, argon has better resistance to thermal dissipation. Argon therein is used because it’s used because it reduces the transfer of temperature between the inside and outside of the skylight. So, in the case of an interior ceiling space, when it’s freezing cold outside and heated warm on the inside, it will not the sky light will not be as much of a cold point as it would be otherwise. The same situation occurs, vice versa, in the summertime keeping the inside cooler than the outside.

Another interesting detail to learn about skylights and windows and general fenestration units, in modern times they’re often required to have low energy transfer ratings or partially reflective glass or glazing. In the case of this this particular skylight, it’s not actually glass, instead it’s acrylic. Acrylic is a thermoplastic similar to commonly used polycarbonates, but in this form the acrylic lens is like a plexiglass and more dense and brittle.

In the image below you can see the picture of the skylight from a distance of about 5′. You can see a hole near the center of the acrylic dome which has been filled with a siliconized sealant. In most cases for this type of application we will recommend against the use of a siliconized sealant, but in this particularly case that emergency response was handled by a different contractor to stop an active leak. 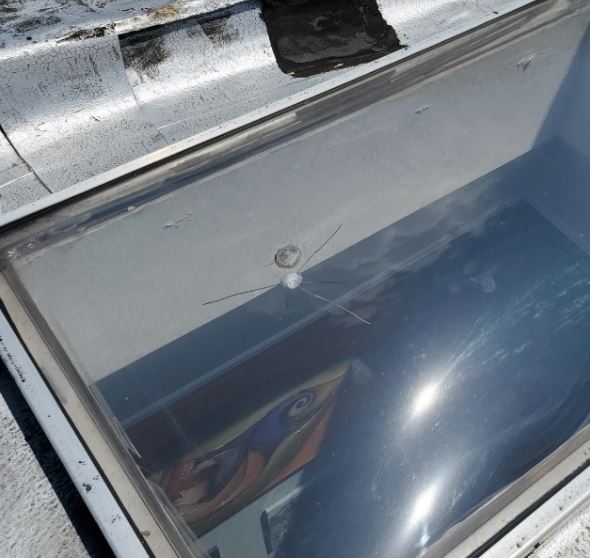 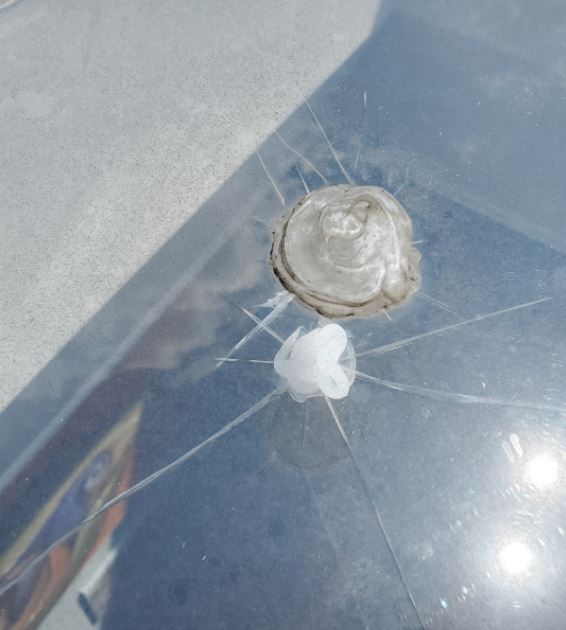 The bullet rolled off to the side of the double glazing’s interstitial space. If you look closely you can see the bullets rifling grooves. This might be a .38 caliber bullet shot from a handgun.

This was a fun topic, both because it is something we don’t get a chance to tell our clients about often, and it is such a unique DC row home oddity. We had a lot of fun researching and learning about this topic. In this article we talked about the following terminology and concepts, follow the links below for more related information from the IDS website:

These concepts are part of the fundamentals of waterproofing, and flat roofing. In other articles, we often talk about concepts and fundamentals related to historic masonry restoration, tuckpointing, and brick repair.