In the past two weekly installments of our blog articles, we looked at the top 10+ biggest and most prevalent threats to masonry structures.  You can see those articles at this link and this link, in case you missed it!  This week we are looking at an infill building between two historic brick facades.

The picture below you can see a building that was built  In the mid 20th century. The buildings on both sides of this building were built at the later part of the 19th century.  You can easily identify that this building is much newer than the neighboring buildings on both sides.   There are several characteristics that indicate that this middle building is newer, right away. We explain these details  item by item.  Today’s blog article can also serve as a guide to understand some of the key features that distinguish mid century works from historic brick masonry facade construction. 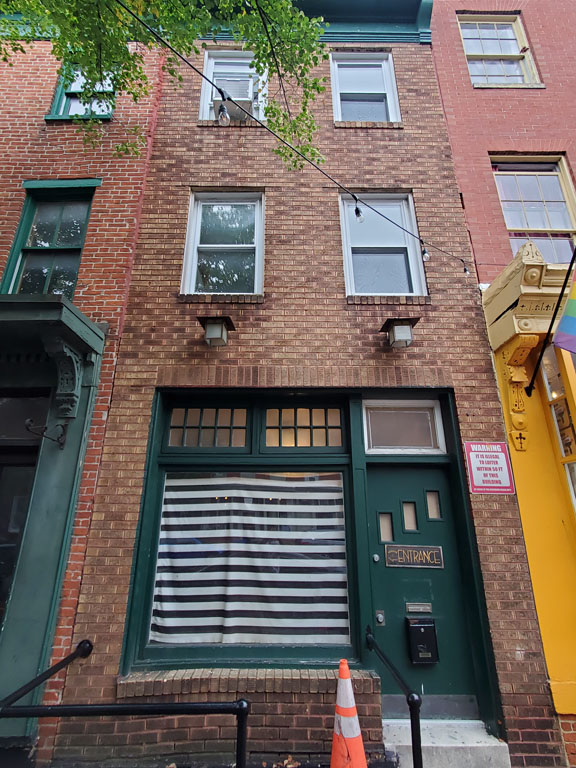 Totally different types of brick have been used in the construction of these buildings. The photo below shows two separate pictures, joined together in a collage. 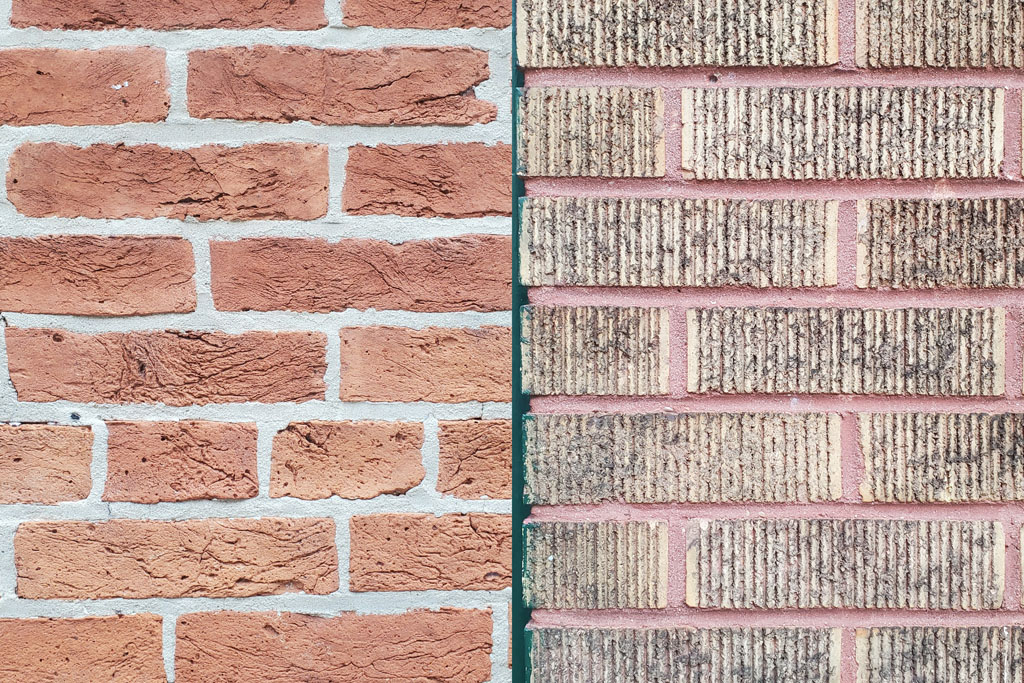 The brick on the left hand side of the photo is a historic common brick in a double wythe configuration. This is also known as a low temperature kiln fired clay brick. Bricks of this type are ubiquitous and one of the most common building materials in historic construction. Both from a volumetric perspective and/or perspective of unit quantity or in overall mass, they are one of the most prolific building materials used in the entire city of Washington DC especially in historic neighborhoods such as Capitol hill, Dupont circle, and Georgetown.

An image of a historic kiln fired clay brick follows below for reference. There’s several details that indicate, just from visual observation alone, that this is a kiln fired common clay brick.

By comparison, the more modern mortar has several characteristics which are distinct from the historic lime mortar. This particular brick is a tapestry brick and has a vertical line that runs down through the face of the brick when the brick is set in a stretcher bond.

Another distinguishing characteristic at this particular facade is that the window and door openings at the entire front of the facade are built with a steel lintels.

On the left hand side of the picture below, you can see that there is a large green horizontal header at the windows to the left.   In contrast, at the building to the right it looks like there’s almost no header at all, but technically between the window In the superimposed brick there is a steel lintel which is called a shelf angle. The steel angle at that location creates a support which spans beyond the sides of the window opening and carries the load of the brick above. 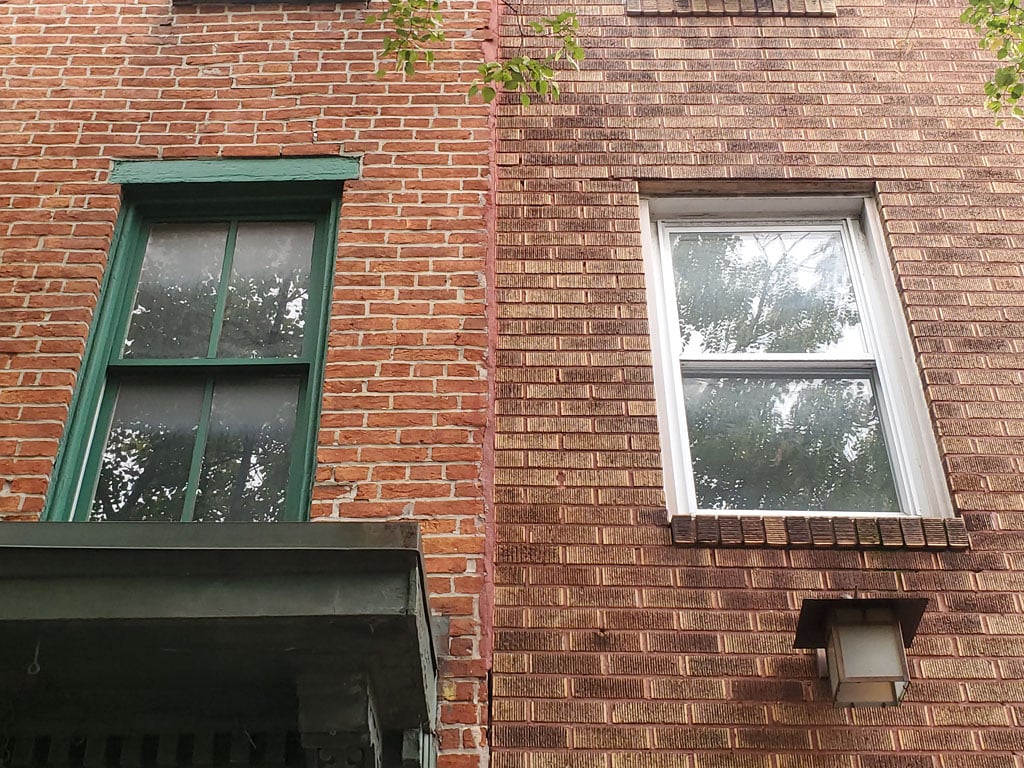 One of the most impressive typical characteristics of the Roman arch is that it is almost entirely self-supporting, indefinitely, even throughout thousands of years of time.  Modern Roman arches will often use brick mortar, but when brick or stones are very closely cut, common in many cases they can be indefinitely self supporting, even without the use of brick mortar. Squint bricks, for example, are custom rubbed or cut bricks which have been shaped to a tapestry to tightly fit in compression in a sprung arch.   By comparison, modern brick lintels, although they can serve space more effectively, when in a rectilinear shape, require a steel support. One of the limitations to the use of differing and varying building materials, within specific assemblies, is that by adding additional elements to an otherwise simple and unique stand alone type of building assemblie, the additional materials deteriorate at differing rates. In the case of steel lintels, they are not quite as durable or resistant to moisture as brick masonry.  Without specialized coating, ferrous metals are extremely susceptible to oxidation from exposure to moisture prevalent in exterior applications.

When steel lintels begin to oxidize and rust, they can expand to 3 or 4 times the original size and that expansion happens with great pressure or force. In result, oxidizing steel lintels can cause significant damage to brick masonry. As well, mortar does not bond well to steel. In most cases, when steel or any ferrous metal is exposed to moisture, oxidation occurs and leads to separation or delamination.

A photo of a steel lintel, embedded in the area of a brick mortar joint, follows, in the picture below. You can see, in this example that the otherwise embedded steel lintel is now, through delamination of the embedding mortar, is exposed at the edge where the original mortar has fallen from the face of the wall. 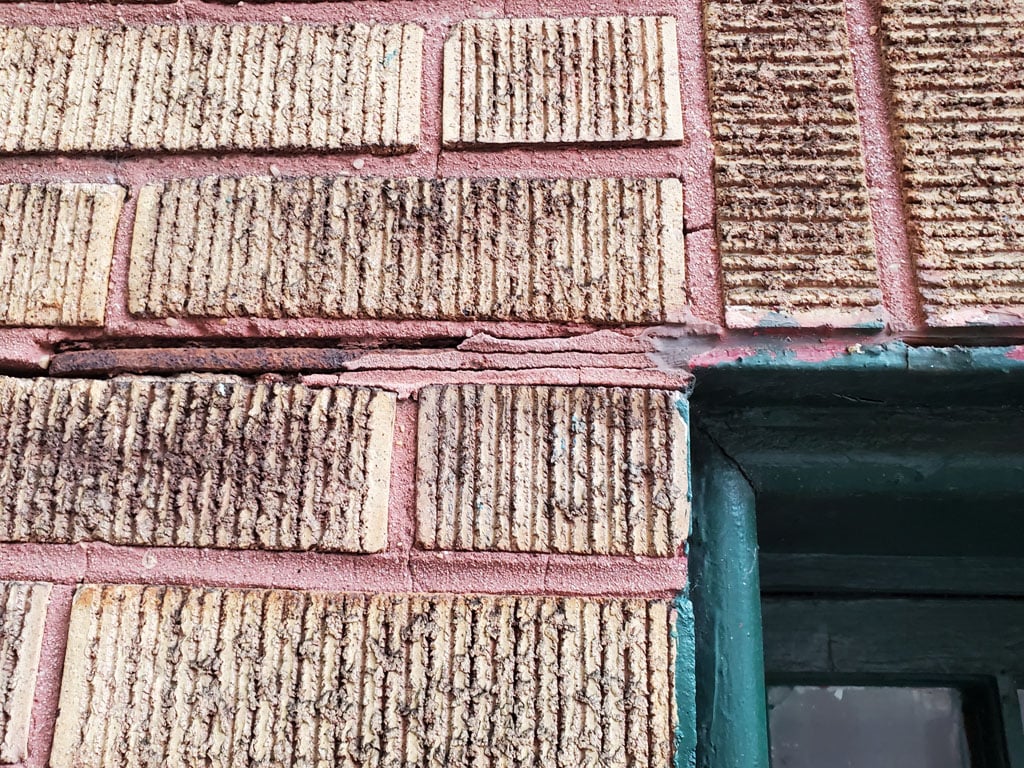 At typical row buildings, when they were built at the same time, brick joints and brick horses continue across the property line, almost uninterrupted in most cases. At this particular case though, by comparison, the brick is separated from the neighboring adjacent brick with a cold joint on both sides. You can see, when you look close, as shown in the photo below, that the brick stops completely, in a straight vertical line. In fact there is a gap between this building and the adjacent building on both sides.

That gap is required because the original buildings were completely finished before this building was built and therefore could not be left with an interlocking tooth-in type of brick connection.  With the brick being built at a separate time, later, there’s now a cold joint which means that the bricks are not interlocked. Since the bricks are not interlocked, this area is filled with a mixture of mortar. In modern times, now we have access to flexible sealants which perform much better to keep out moisture and allow for natural building movements.

In this specific example, you can see there are limitations and problems associated with simply filling this cold joint with brick mortar. Brick mortar, alone, does not have an elastomeric nature which allows it to flex and move. Overtime, at a cold building joint like this, a location of expected movement between buildings, you can see that the brick mortar has broken and cracked and fallen from the joint area.   Elastomeric sealants, by comparison, can work to resist moisture entry and also provide a sufficient tolerance to naturally differential building movements.

This issue is problematic because it allows water to enter into the space between the two buildings. The space or cavity in the cold joint is very small and once water gets into the cavity, there’s almost no natural way for the moisture to get out. Instead the moisture will seep through the brick walls and once those internal or interstitial spaces are hydrated, they stay wet and hydrated for a very long time period.  That type of long term hydration leads to accelerated deterioration of the brick mortar and brick units themselves. Essentially by allowing water to get into this space, it accelerates the deterioration of the brick wall and leads to accelerated failure of the building. 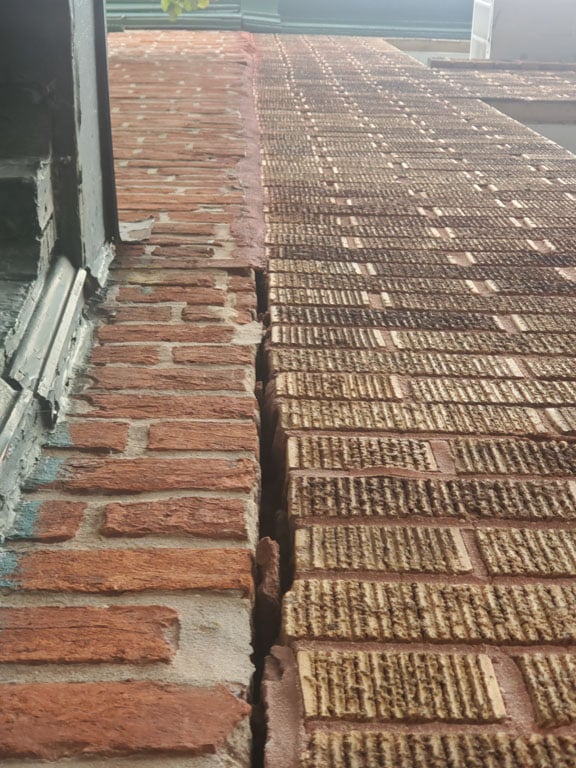 When comparing between modern brick and historic brick, mortar joints are similar, but in some cases the common brick will have larger joints. (A side note, but an interesting observation is that the historic brick has been pointed / aka tuckpointed in recent years.)  An even greater differential or contrast is seen in the difference between a historic brick mortar joint of a common brick versus a pressed brick’s mortar joint, called a butter joint.  In historic times at places where the brick walls were not front facing or intended to be exposed or visible at close proximity,  Large mortar joints were used because brick was comparatively much more expensive. Murder though, on the other hand was very inexpensive. Historic lime mortar was largely made up of sand (and lime as a binder). That sand worked as an aggregate, similar to modern mortar, but sand was ubiquitous and did not require firing such as is required in the production of bricks. Kiln fired clay bricks are fired from a high temperature burning fuel source. Even in historic times when the forests were robust and thriving, and even when firewood was abundant, the firing process still required large fuel resource consumption to create high temperature burning fires.  Bricks, at the time, would be fired for over a day per batch.  That massive amount of thermal energy required a significant resource expenditure.  For these many reasons, it was cheaper to build a wall with large mortar joints than thin mortar joints. Nonetheless, it has almost always been regarded as more prestigious and beautiful to have thin mortar joints. This interesting preference, based on human aesthetic opinion and interpretation is interestingly consistent across several cultures and peoples isolated both in time and space.

Parallel invention is the phenomenon of groups or individuals of people, creating similar inventions or development of technology even though completely separate and isolated from each other.   Brick masonry is one of the most powerful examples of parallel invention  In the long history of humankind.

In the photo below call me you can see another example of 2 different brick buildings that were built at the exact same time period. In this case, there is no clear separation of the 2 buildings, by looking at the field of the brick alone. Instead, if you compare the cornice at the top of the building, you can see the line or location where the property line lies between these buildings. Since they were built by the same contractor at the same time, the brick just continues straight across. 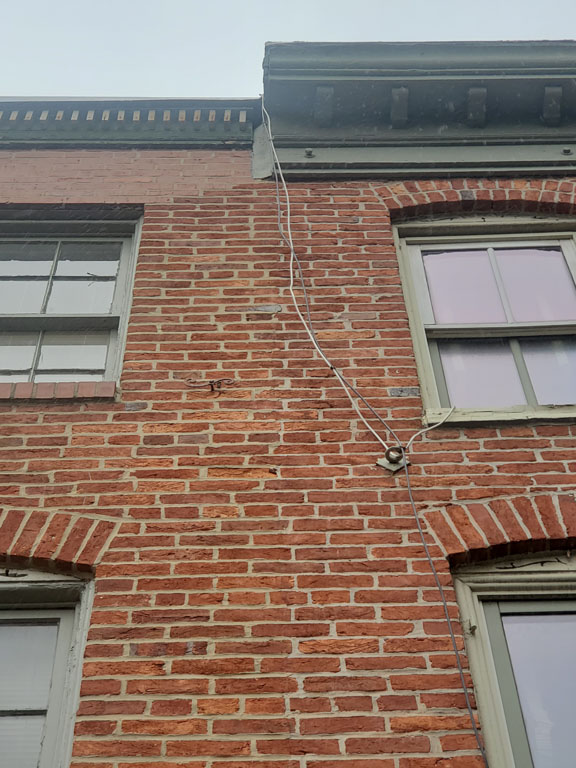 The lack of detail and ornature in the cornice of this building is another detail that distinguishes this more modern building from the historic building to the right, as shown in the picture below.

In the picture above, you can see that the building to the right has a much larger cornice with a deeper roof eave. The cornice (similar to, but distinct from an architectural freize) employs a corbel for ornature, above an architectural cordon or architrave to provide elaborate detail and flare.