Last week, we took a look at a historic building facade as part of a case study to examine and understand historic masonry. This week, we’re taking a look at another historic brick facade in the Dupont circle neighborhood of Washington DC. This building is built with historic common brick. This type of masonry, in a common bond, is prolific in Washington DC, particularly at the demising walls where exposed at the sides of the historic buildings in the heart of Washington DC.  Pressed bricks are more common at street facing front facades.

We are looking at a mid-rise building, similar to the construction of many historic rowhomes in Washington DC neighborhoods such as Dupont Circle, Capitol Hill, and Georgetown.   Mid-rise buildings typically range from about five levels to 12 levels. Buildings above 12 levels are clearly considered high rise buildings and below 5 levels can be classified as low rise buildings, in many cases.

In some cases, depending on jurisdictions and locations, high rise building classifications may include buildings as low as just 5 levels.   Throughout the massive expanse of the Midwest of the United States, for example, there are thousands of towns and cities scattered across millions of square miles of land that include very few buildings greater than just 5 stories.   The vast majority of the buildings in the United States are just small low-rise buildings.  In fact, high rise buildings, overall, in the United States are concentrated in great density in just a few locations. Washington DC, with its contrived arbitrary height limit, still includes thousands of buildings that are greater than low rise level.

Here, in the example of the building discussed in this week’s blog article, this building is somewhat unique among the inventory of buildings in the United States and the world for that matter because this building, while also being a mid rise, is also a historic brick masonry building. Mid-rise buildings are common and historic brick buildings are prolific in the early historic cities of the east coast of the United States.   So these conditions are not unique, but large brick buildings are also not common. Many of the original large brick buildings in the United States were built after the Great Fires, such as the Great Chicago Fire. Before this catastrophic episode of destruction and rebuilding in America, the landscape of our oldest American cities looked very different.  Cities, of prior times, in America, comprised a tapestry of different materials including timber harvested from the Eastern Deciduous Forest of the lands internal to the Atlantic east coast of the United States of America.

In the picture below, you can see an example of the alley side facade of the building examined today. There are 5 levels above grade and an additional level almost entirely below grade.

All of the window openings at this facade have a segmented arch header.  Opening headers help span the open area needed to install windows or portals. The headers are the spanning elements, in many cases, such as in this building, built with the same masonry units as the remainder of the wall or partition. 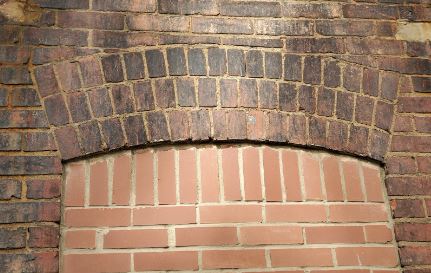 Particularly, this type of segmented hardge header is built with a triple course of rowlock brick.   In a rolock configuration, the smallest edge of the brick is exposed in a vertical position.

The picture below shows an example of a segmented arch with brick installed in a rowlock configuration.

In contrast to a historic Roman arch or a keystone style arch, this type of segmented arch is actually not self supporting and relies on a supporting substructure, generally made with wood timber framing, built into the brick wythe of the wall.

In modern brick headers, shelf angles or steel lintels are often used to support the brick superimposed at the area above the opening.

In the image below, you can see a close up view of the alley paving installed at the mid height of an original window opening header. Originally, the window openings could have been used for a combination of fenestration to light the basement space, or ventilation to allow fresh air to enter or exchange mechanical gasses.   In the case of this building, due to the tight configuration of the limited alley space and the adjacent property line, these openings, while still technically open, are largely reduced and covered with a steel grate.

The original basement windows are just one of the many types of building elements, seen at this site which have been abandoned, or modified, deleted or superseded in recent years as the building use has changed and modified over time.   The original fire escape stare No longer reaches the lower levels of the building and at this point is defunct and not in use. In fact there’s no way to access it, but likely in an attempt to reduce the cost of removal, the upper levels of the fire escape stairs still remain to this deck. You can see the black and red rust stains running down the sides of the building caused by oxidation of the remaining structure.

We discussed the condition of oxidizing metals and rising metals and staining on the face of brick masonry and a recent article at the following link.

Part 1 of this article is at the following link.

Part 2 of this article is at the following link. 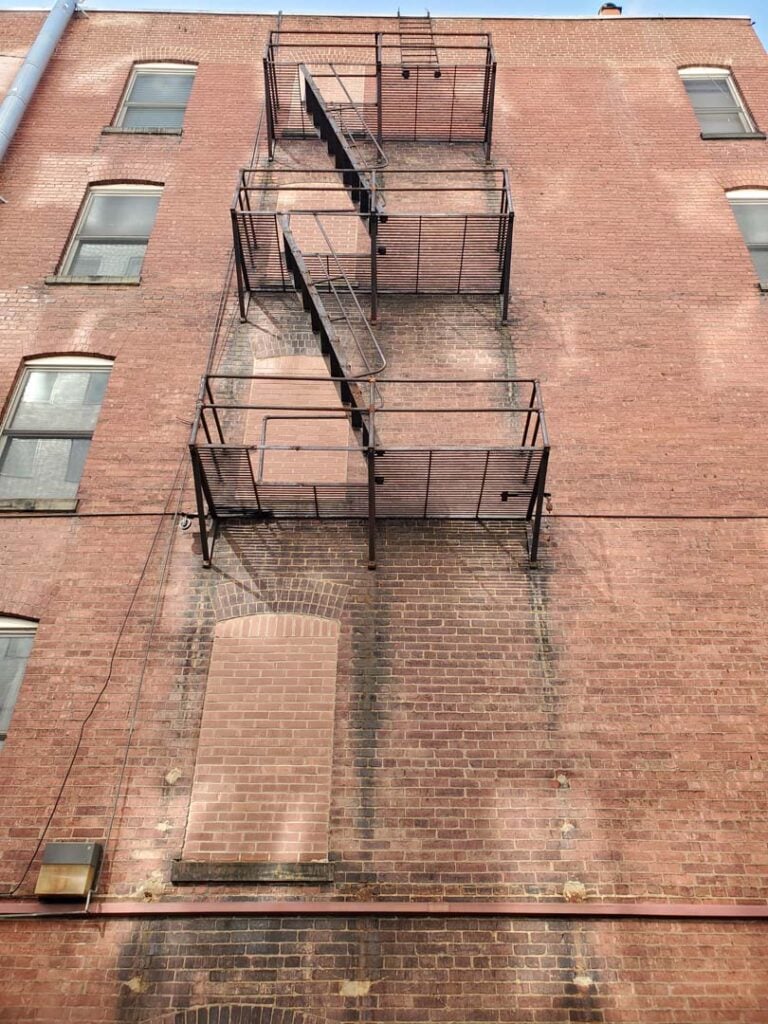 While oxidation standing doesn’t cause structural damage to a brick building, it ruins the historic beauty of a brick building and removal of the oxidation and staining, if done improperly can cause significant damage to the longevity of the brick. Proper removal of oxidation is very expensive. This is one of the many cases where an ounce of prevention tends to provide a pound of cure. In other words, by preserving or removing abandoned ferrous metals, it can save a considerable cost later by reducing damage caused from neglect and deterioration.

Over the many decades since the original construction of this building, Washington DC has gone through several different periods of economic cycles including both poverty and prosperity.  Wealth has always resided here In our nation’s capital, but as is evident and shown just from looking at the architecture around us, greed and concentration of wealth in the hands of a few has led to increased costs of remediation of detrimental conditions.  Those costs are shared by residents and stakeholders of the built environment of Washington, DC.  A great sacrifice is made by all, even in a market system which rewards profit driven decisions, in the absence of collective consideration.   Not only in financial terms but in quality of life, quality of the surrounding environment, and loss of aesthetic beauty, as buildings are built with cheap and poor quality. We all pay a price by losing the beautiful historic architectural fabric of the city.

In the picture below, you can see an example of a window covered with security bars. This security bar set up allows egress and is constructed to meet the requirements of the building code. The building code in many cases will require a sill height of an egress portal to be no higher than 44″ above the interior finished floor. The overall size of the window must be no less than  5.7 ft².  Access to the locking mechanism must be provided within the construct itself and be operable without special means or knowledge such as a key or code. The mesh has been installed, in this case to allow the lock set to be opened by hand. 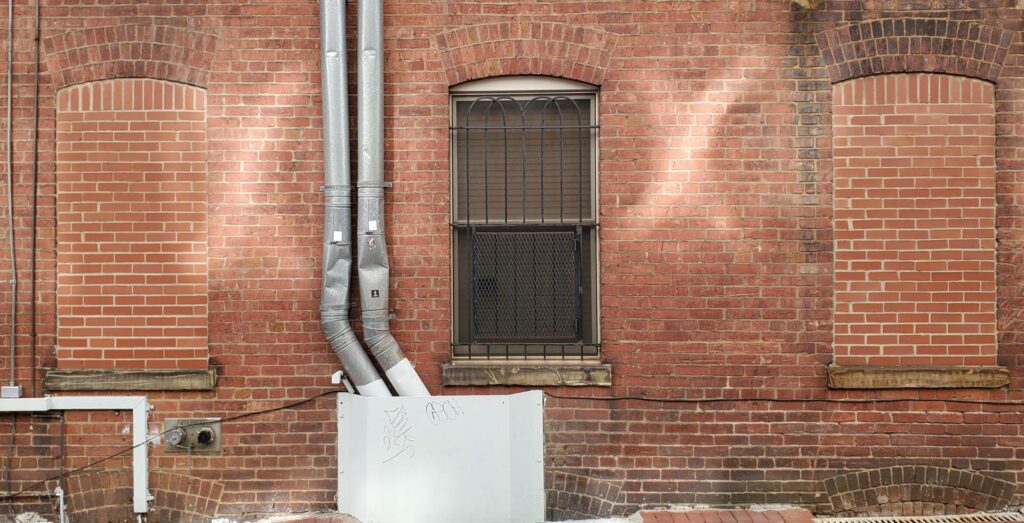 One both sides of the security window, windows have been infilled with brick.

The picture below shows the transition between the original historic brick and the infilled brick. The infilled brick looks more uniform and somewhat lighter in color.  The surface is smoother and doesn’t have large creases or folds in the plug or clay surface of the brick. 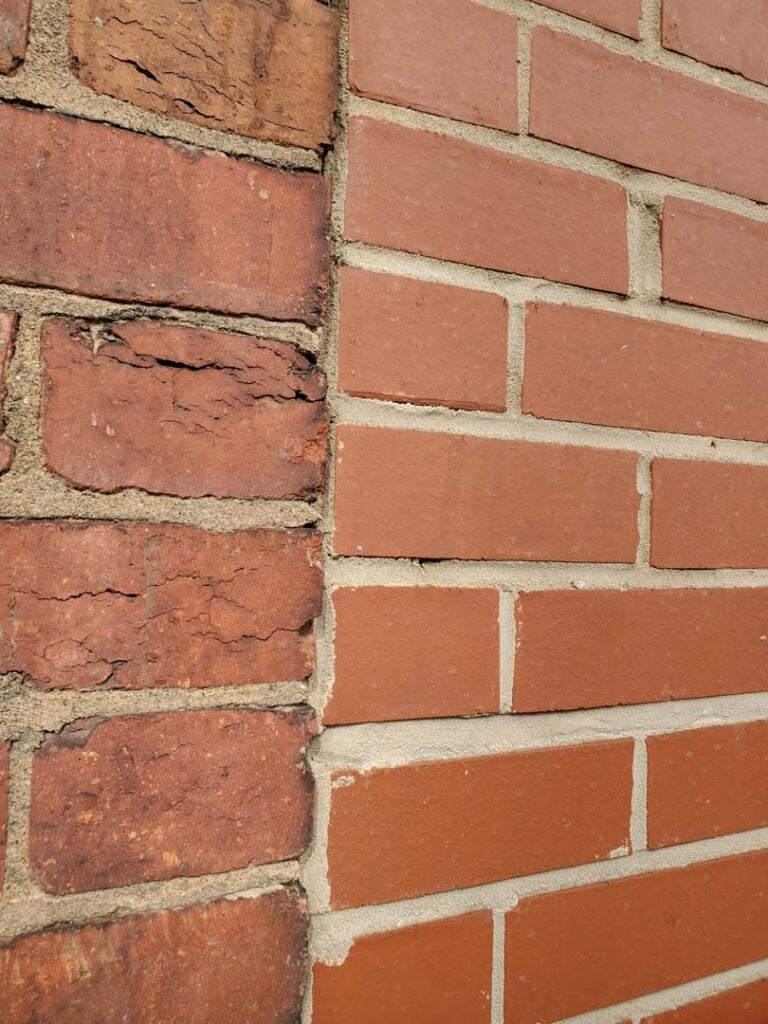 In the picture below you can see an example of the Car Barn in Capitol hill. This building originally was a large brick building, constructed in the late 19th century, used to store train cars.   Currently the building still exists but has been gutted and converted into housing. 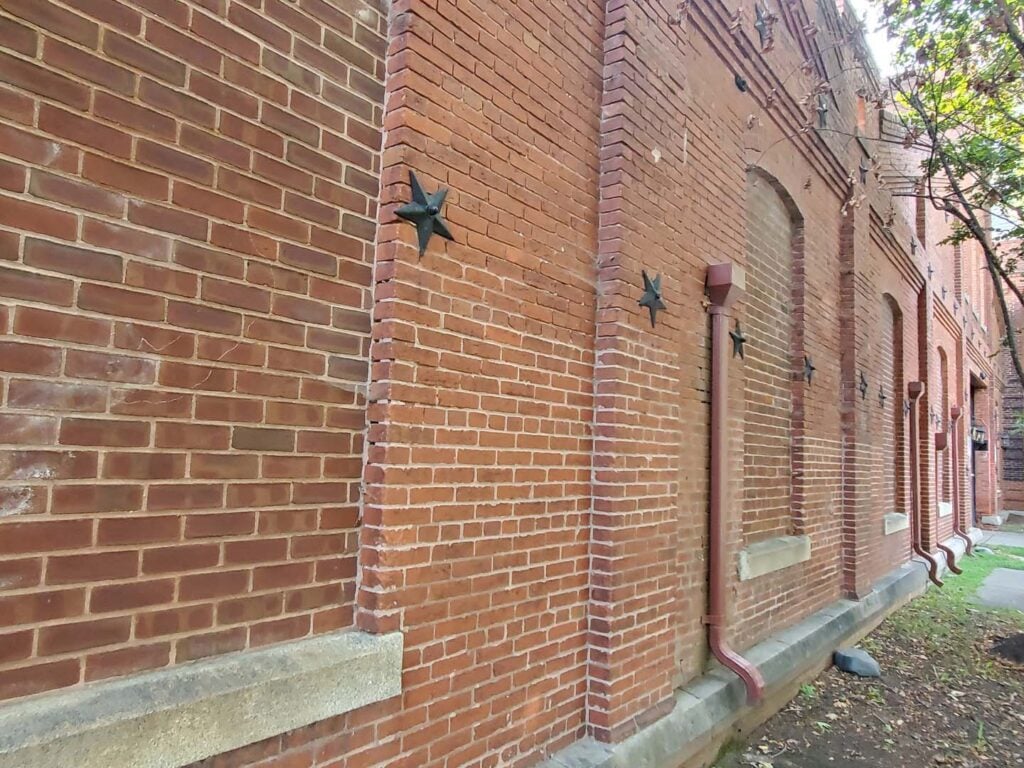 As you look across the side of this large historic brick building, you can see that the original construction included significant open space in the walls which allowed for both fenestration, illumination, and ventilation.   It’s very sad to see that This wonderful architecture has been infilled  Largely as a result of or reaction to significant crime in the Washington DC city neighborhoods and as a way to lower construction costs.

The next picture below shows 2 more examples of the brick infilled walls at the car barn in Capitol hill, Northeast Washington DC.  In the picture on the right, you can see that in this triple wythe wall, the brick is set back at a 3.5″ recess, the dimension of a typical brick bed wythe.