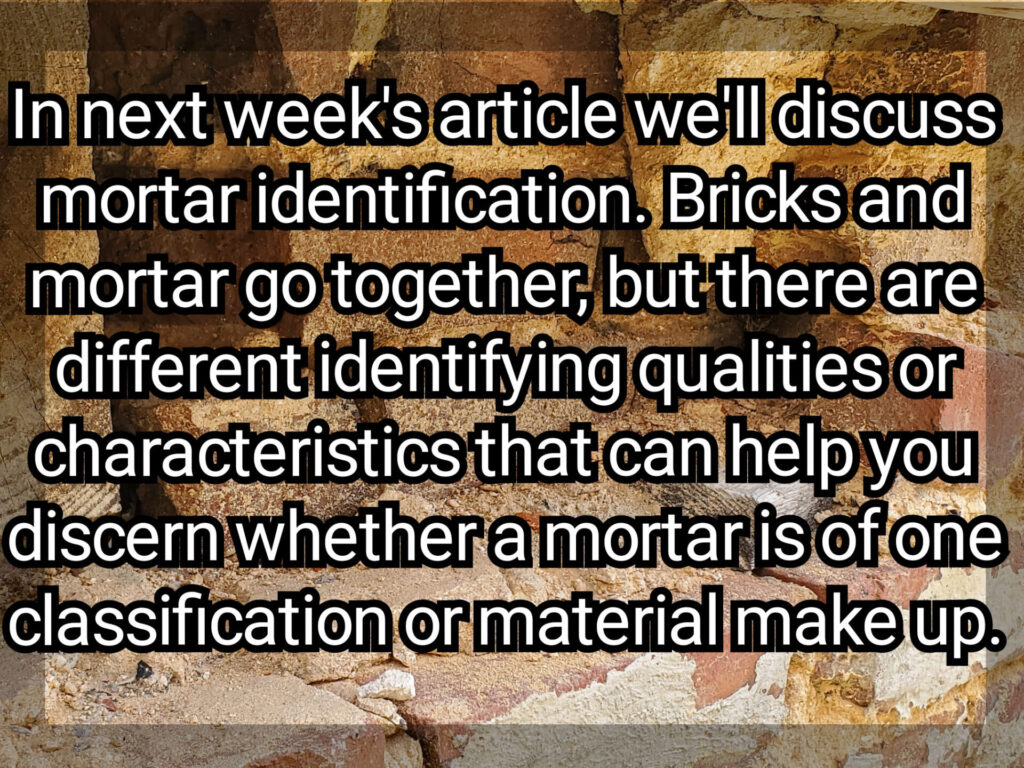 Often, we can walk right up to a building facade and immediately identify the era of construction from which the brick originates,  just from visual observation.  There are telltale signs, even looking close at the brick without taking the rest of the building into consideration. However, in some cases it’s not so cut-and-dry. Often it’s difficult to discern whether a building or a brick was built or used in used in the late 1800s or early 1900s or mid century or later. Sometimes modern bricks can look similar to historic common bricks.

There are ways to tell them apart; nonetheless, it’s not always exact science.  You can make a relatively accurate, informed guess, like a hypothesis, most of the time by understanding a few key concepts and principles related to identifying historic bricks versus contemporary or modern brick masonry.

When restoring or tuck pointing a historic masonry wall, it’s extremely important to understand the characteristics described in this week’s article.   At the time of tuckpointing or historic masonry restoration, if improper or poorly compatible mortar is used, the effects can be consequentially extremely negative and detrimental to the future longevity of a historic brick masonry wall and building.

So this week, just looking closely at bricks by themselves, not mortar, just bricks. There’s several items or characteristics we can examine to identify whether a brick is modern or historic.

When looking at a loose brick, outside of a building assembly, you can identify a lot more characteristics of the brick.  We take a closer look and examine these characteristics.

The quickest and generally easiest way to tell whether a brick is modern or historic is to measure the brick width.  Historic bricks are longer than modern bricks.  Take a look at our encyclopedia, you can learn a lot about brick and masonry and historic construction architecture but in our encyclopedia we have included an entry just on the comparison of size between modern and historic bricks. They are simply different dimensions. Modern bricks became standardized in standardized in the 20th century and now most but not all modern bricks are a similar width that is approximately 7-⅝”  wide in the stretcher position.

A lot of people are surprised to learn that historic bricks are wider than modern bricks. Our customers ask us why it changed. In around the 1920’s-1930’s, brick sizes were standardized. Prior to that brick sizes weren’t really coordinated between different manufacturers.

The picture below shows a modern and historic brick, side-by-side.   Both bricks are the exact same height, 2.25″. This particular height allows for quick and easy quantification and mathematics when calculating the quantity survey of bricks in an existing wall or needed for the construction of a new partition or building assembly. Essentially the 2.25″ height of the bricks allows for an approximately 3/8 inch mortar joint, to fit into a relatively easy calculation. There are 3 EA courses, for example within a linear height of eight inches.  Therefore, extrapolating and using the simple mathematics, a 2′ wall section would have 9 EA horizontal stretcher courses. A 20 foot tall wall would therefore have 90 courses.   That simple standardization makes quantity calculation much easier.

In the image below you can see that the historic brick is 8-3/8 inch wide.

By comparison, the modern brick is 7-5/8 inch wide. 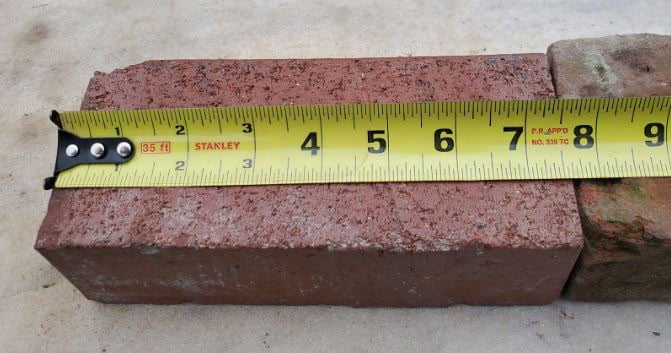 On its own, a partition built with either historic or modern brick will work fine, from a dimensional perspective. The modern brick partitions are easier to quantify quickly because of the facility of mathematics in standardized brick sizes of modern brick. Also though, you can see a particular problem or issue that comes up when historic brick infields or openings are infilled with modern bricks.   The rich joints must be enlarged or cheated to make up for the smaller modern bricks if the prepend joint layout is to maintain consistency.

When you look at the top of the bedroom face of a brick, in this case in the stretcher position, you can see that the that the contemporary brick has a it’s greater texture on the exposed face of the brick.   You think of the historic brick as having less consistency and homogeneity, and that’s true, but the face is actually smoother. The difference, which makes the contemporary brick have a rough face is that it is a wire cut brick. Meanwhile the historic brick is Box formed. A buck’s swarming process gave the historic brick a smoother they’re outer texture. Meanwhile, the wire cut process of the modern plug How much you create a modern brick gives the modern brick a rougher texture.

Plug is a giant mass of clay, when a giant mess of clay is extruded through the modern equipment, imagine it being squeezed out like a giant block of Plato through a though through an extruder.   At large mass of clay, called plug, is then cut with wires. Those wires cut the plug into a to a straight faced rectangular form. The bricks run on a conveyor belt and then are cut again to length. As those wires run through the plug, the giant mass of clay, the small pieces of aggregate inside the relatively low moisture plug are dragged removed a tiny bit and that creates a rough texture.

So, in summary, the modern brick generally, will have a rougher texture than the historic.This is a good characteristic to observe when trying to determine if a brick is modern or historic.

One of the big differences between modern and historic bricks is that modern bricks are kiln fired at a much higher temperature. That difference is not exactly visually obvious, but when breaking a brick with a hammer or even cutting it with a zirconium disc saw, you can identify that the modern brick is much harder, meaning that it has a higher compressive strength. Modern bricks are more vitreous.   This difference has several resultant effects. Historic bricks are more porous and water and hydration will enter and move through a historic brick with greater ease than a modern brick.   Therefore, historic bricks are technically more susceptible to moisture from precipitation. Moisture from precipitation though, by itself, does not cause or result in significant problems. Scam pointing however, can be devastating to the longevity of a historic brick wall due to the incompatibility and the fact that scam pointing using modern mortars will trap moisture into a permeable historic brick.

While moisture permeability itself is not a detrimental quality of a historic brick, historic bricks perform poorly to resist rising damp and rising damp can have significant negative effects on a brick wall.   Rising damp can normally be identified through moisture testing of brick partitions or through the visual identification, even without the more extensive process of identifying water and leak trails.  In such circumstances, concentrated efflorescence at or near the base of a masonry wall is generally easy to identify.

In more detail, you can go further and break the brick in half and get a better look beyond the face of the brick.  You see the internal makeup of a historic brick in the adjacent image. 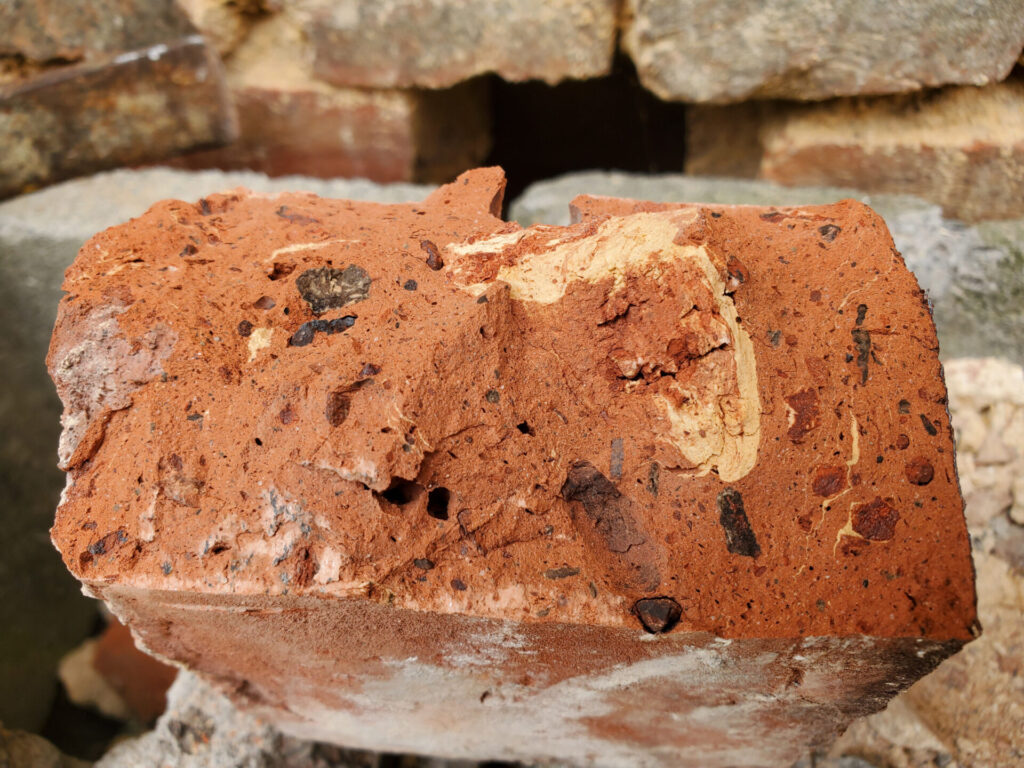 Scam pointing can lead to spalling and surface delamination of bricks.   Sandstone, such as brownstone in stone masonry is very susceptible to delamination because of the stratified layering in the stone.  (Granite stone by comparison,  when subjected to the same extermal environmental conditions performs much better to resist these effects.)  Historic brick is also more susceptible to delamination than modern brick,  also due to the heterogeneous nature of the substrate materials.

Rick, when cared for properly, is an amazing building material which can last for hundreds of years. It’s one of the rare and few building materials that is naturally resistant to ultraviolet rays, largely resistant to the detrimental effects of precipitation and moisture, and a strong durable material that can even resist fire.   Considering the great technological advances in building materials over the last 100 years, even modern homopolymers and heteropolymers, while utilizing breakthroughs in flexibility and elasticity, still cannot replicate the superior characteristics of brick masonry.

The pictures below show 2 bricks that have been cut in half, similar to a brick bat or closer brick.   By cutting these bricks in half, you can see a closer look at the internal substrate materials.    There is a significant difference between the internal makeup of a historic brick in the photo below on the left side and a modern brick, shown in the photo below on the right side.

Bricks are red, not just because the substrate is generally a red color clay but specifically because that red color comes from iron oxide present in the earth.   Iron oxide, when fired, will become a brighter red. Concentrations of small iron ore will become a darker black color. You can see dark black specks in the historic bricks.

The next photo below shows an even closer view. The historic brick on the left, has large portions of rock and large iron materials inside of the brick.  Whereas, by comparison, the modern brick on the right side of the photo has a much greater consistency within or among the substrate materials. This difference is due to the ability of hydraulic modern equipment to lift and move large amounts of heavy material, with ease, through sifting and filtering materials before the plug is created. 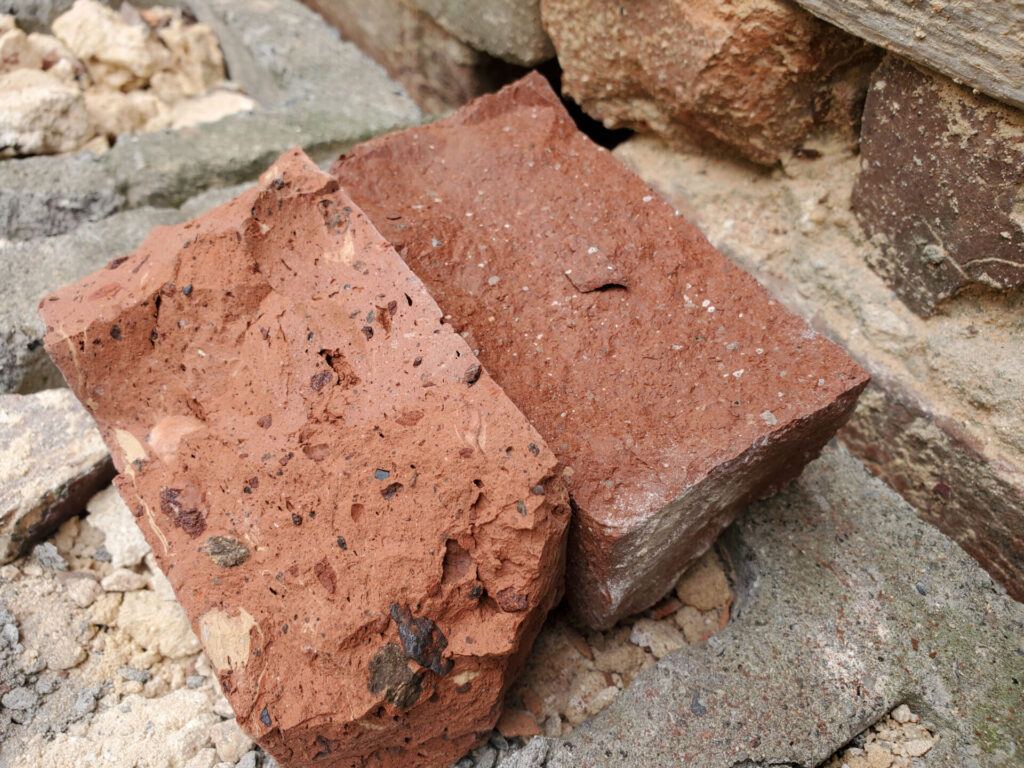 Here in Washington DC, historic masonry buildings are extremely expensive and the amount of financial loss caused by improper repointing and low quality construction is staggering.   However, in addition to the direct financial value of the property, there is also a cultural loss when historic buildings are damaged. By comparison, consider neighboring poor cities, when historic buildings are damaged, it’s not just the loss of value to the property owner, there’s also a loss to all inhabitants and visitors of a city, present and future, who care about architecture, history, and culture.

previousTuckpointing and Repointing – What Are The Benefits?
nextTop 5 Ways To Tell if Brick Mortar is Historic or Contemporary