In the early 20th century, big, a new style of framing swept across America,  California platform framing. This new style of framing, similar to it’s predecessor, balloon framing, allowed the structural load path of the building to be carried by uniform uniform dimensional lumber.

As platform framing gained popularity,Bricks became used for the first time, en masse as a new market and new technology, just as a facade skin.   Now, these bricks did not require the same fire resistance capacity nor the same structural bearing capacity.  To save costs of transportation, materials, and loading capacity requirements, hollow bricks were created. Hollow bricks are similar in most ways but have a central portion removed through perforation which reduces the overall amount of materials and weights load of each brick.

In the image below, you can see examples of a hollow face brick that was removed from a 1930s building in northeast Washington, DC. In this particular example, an addition extension is being added to the side and front facades of the building. In this case, the demolished walls are are being picked and cleaned to reuse brick to position the salvage brick at the front facade.  But, in this unique circumstance, the salvage brick was a hollow brick, used used as a addition done addition done or completed in previous years. 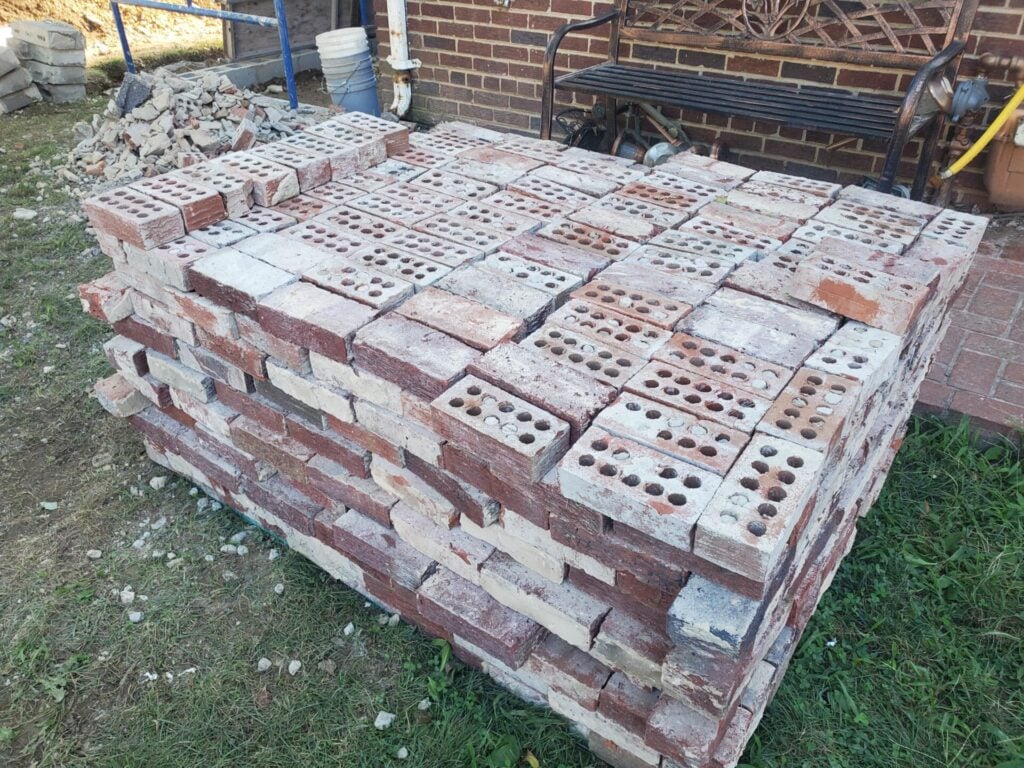 You look closely at this brick, you can see that some of the perforation holes in the brick, 12 per brick, are filled with mortar from the bed joints. In this case, one of the few advantages of a hollow brick is that, like a brick with a frog, the perforations create a key for better cohesion of the brick which therein creates better lateral structural strength, aka latteral deflection resistance.

As a side note, the pile of brick, being dismantled and cleaned, to remove mortar at the head and bed facings of the brick, is shown below. This is an arduous and tedious task, very laborious and costly in the Washington, DC market.

The following description is from Community Forklift’s website www.communityforklift.com

“Community Forklift is the DC area’s hometown salvage yard. We pick up donations throughout the DC region, then offer those items to the public in our 40,000 square foot warehouse. Shoppers marvel at the thousands of unique vintage items, reclaimed wood, door and window selection, lighting, bath fixtures, tile, furniture, appliances, hardware, tools, bricks, marble and granite, and much, much more. Visit us seven days a week to shop or drop off donations at 4671 Tanglewood Dr., Edmonston, MD 20781 (five minutes from DC). Community Forklift’s name refers to our mission: to lift up local communities through reuse. When you shop or donate, you’re helping us make repairs affordable, reduce waste, promote reuse, and create green jobs.”