In the classic historic neighborhoods of Washington DC such as Georgetown, Capitol hill, Dupont Circle the majority of brick buildings are built directly on top of the property line, on the end of rows and other locations.  Where there are anomalies, sometimes the property line does not intersect or bisect the facade wall of the building, but in most cases where row buildings meet one another, that brick wall sits directly on top of the property line and the property line lives within the brick wall itself. In today’s article we talk about windows that project beyond a building facade. Often those windows will project onto public space, especially in urban environments like Washington DC where sidewalks often are built directly next to buildings.   In most cases, in our urban architectural landscape, the projecting windows will not necessarily interrupt pedestrian traffic or traffic of any type, because the windows are generally set in an upper story of the building, but there are exceptions and unique configurations and layouts as well between public space and private space.

The image below shows an example of a brick wall built directly against or next to a public sidewalk. At the upper level of the building are projecting beyond the facade, similar to an oriel window. This particular window projects over three feet into the space above the public pedestrian sidewalk.

This is a historic brick building with a header course laid at every six courses, a type of common bond.   The brick is a low temperature fired common brick. The common brick bond sounds similar to a common brick, but they are only related through coincidence, despite both terms having the word “common” in their name.

From the underside of the projecting floor, you can see 3 corbel like support elements.  In the case of an oriel window, in contrast, the support is generally built with structural corbels that transfer the load to the vertical load path of the wall without a cantilevered transfer of structural support.   This particular type of bay or bump out is relying on the framed floor joist of the interior to support the extended cantilever of the bump out. 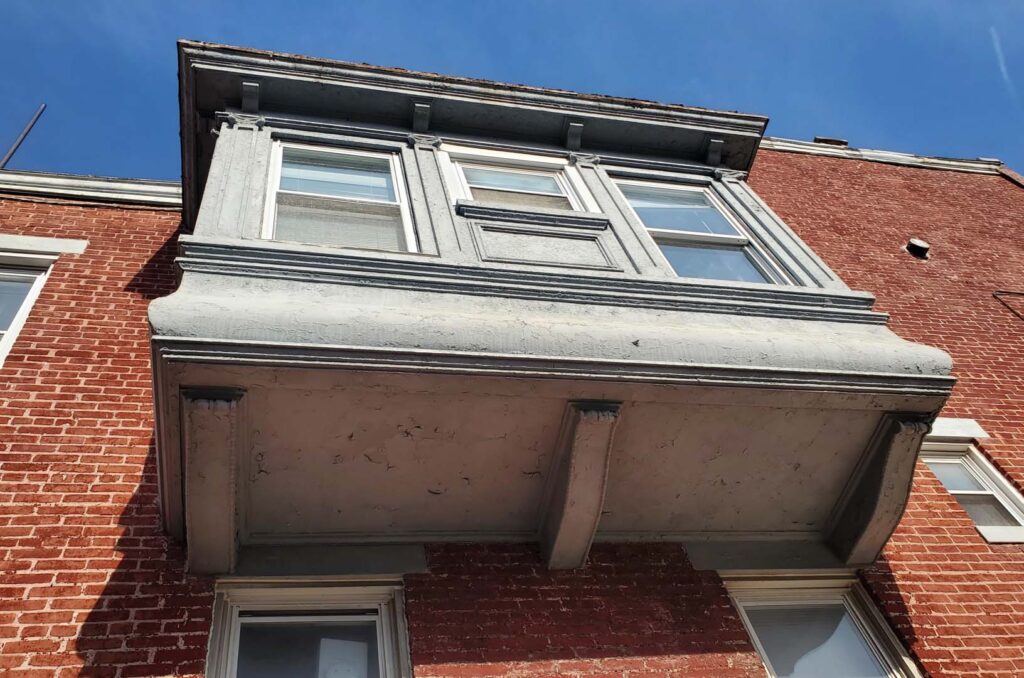 One of the benefits of all types of projecting windows, inclusive of typical Bay windows, Box Bay windows such as the one shown below, and oriel windows is that additional light or fenestration can be drawn into the building by enlarging the area of potential exposure to natural light and modifying the configuration of glass facings to catch the many angles of light as the sun moves across the sky on a daily basis. 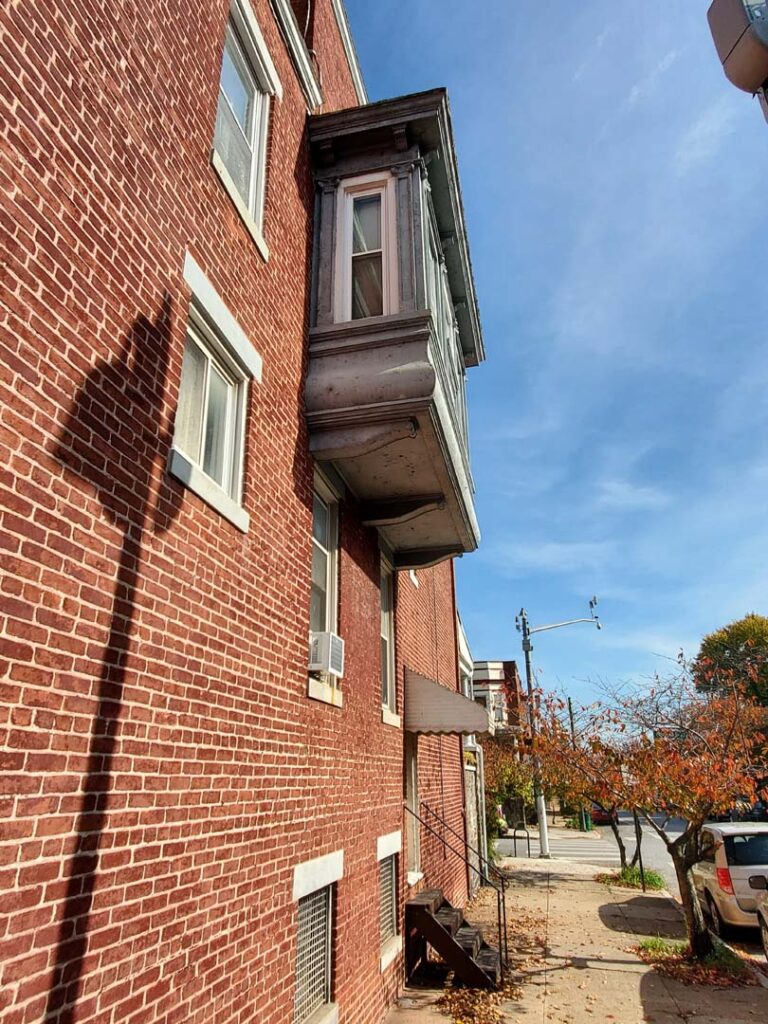 The projecting enclosure, shown above, is built with wood framing members extending beyond the brick masonry facade is referred to as a box bay window. A typical bay window is generally built in a similar way, but by comparison, Bay windows will often have a load path, in line with the layout of the windows that continues down vertically to the building footing, in the same plane.

The next image, seen below, shows 3 large sandstone masonry facade buildings, each five levels in height, inclusive of the basement and attic levels.  Each row building has a prominent bay in the front facade.  Each bay, in contrast to a box bay or oriel window, is superimposed, directly in line with and bearing on a building footing. 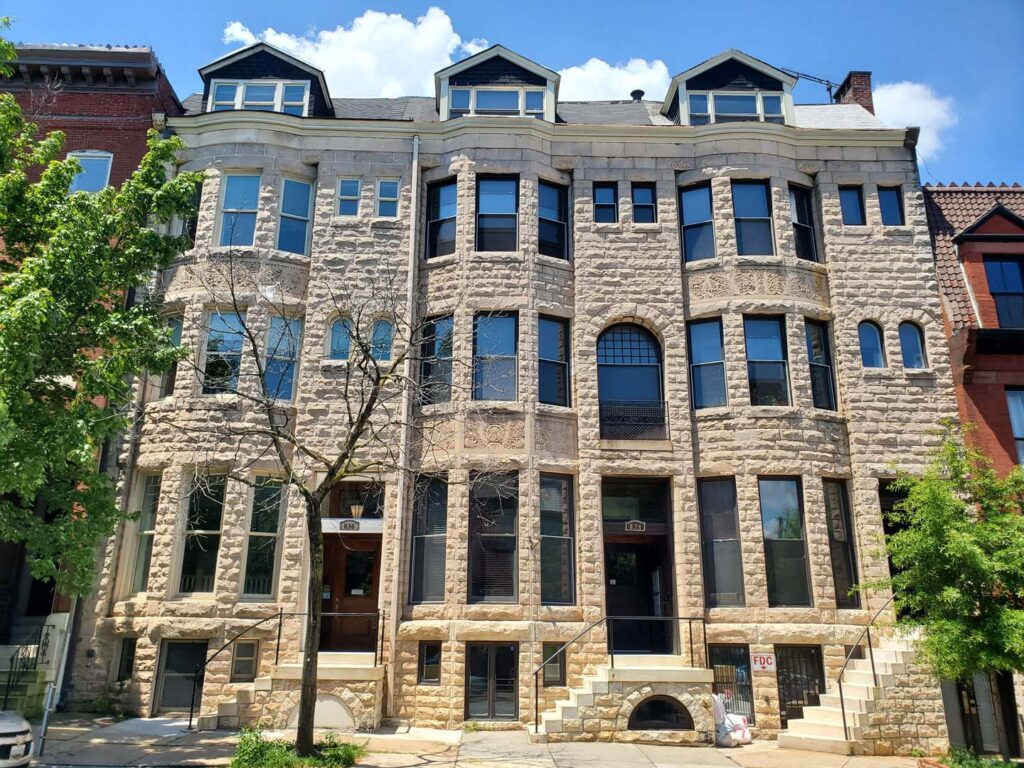 The Box Bay type construction requires a transfer in the load path, using a cantilever over the underlying structural brick facade wall.

The picture below shows several buildings, built as part of a row of houses. These houses are also built with brick masonry construction. The demising walls between each building and at the exterior facade at the end of the row are built with low temperature kiln fired clay historic common bricks.

In this case though, the projecting Bay windows are not built entirely cantilevered, in fact they are each  largely supported by the roof above each building’s front porch. 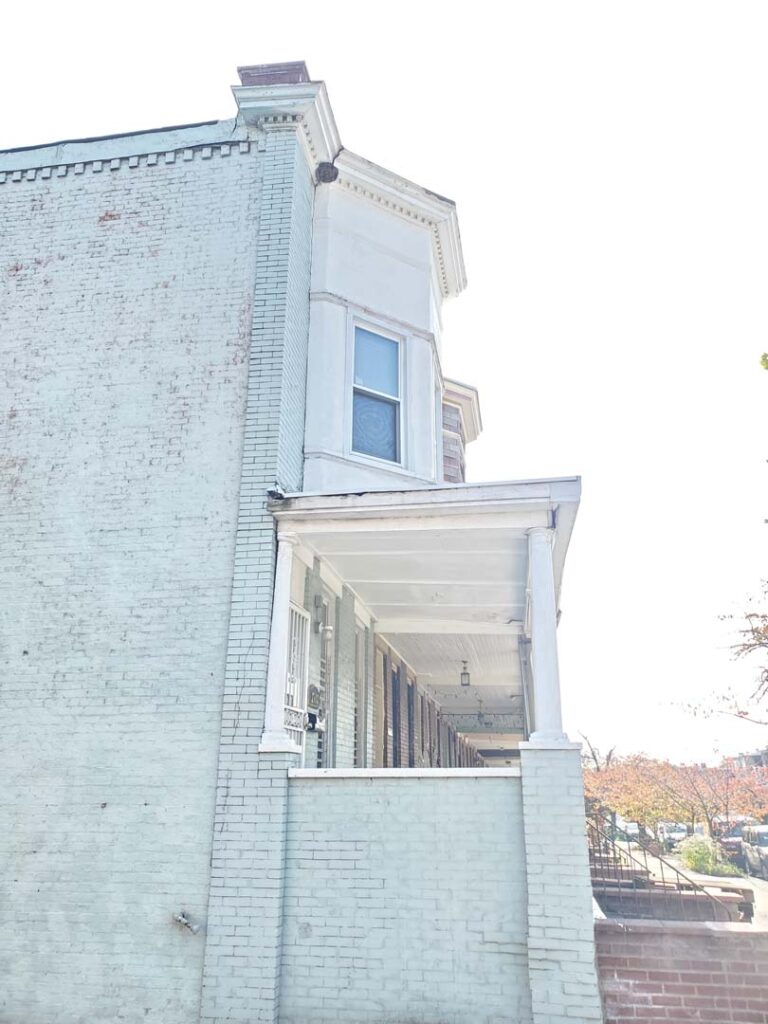 The picture below shows a very similar example of a cantilevered bump out. This bump out, like many of the ones examined in this week’s article, also has windows on three sides which allows for greater fenestration and light infiltration to brighten the otherwise dark rooms of Washington DC and Capitol Hill typical historic row homes. This particular stick frame construction, though, has a particular contrasting paint scheme on the trim and details, based on extreme contrast which adds a level of architectural highlight to each element.

In the mid to late-19th century, when the vast majority of the historic brick row homes were built in Washington, DC the Victorian, Italianate, and Second Empire styles were used throughout.  Until the late 1800’s though, paint colors were comparatively dull and largely made with naturally available colors and pigments.  At the time, many elements of construction were comparatively very expensive.  Paint and manufacturing of paint pigments and colors was particularly resource intensive.   It’s easy to take the vast array of bright and vivid options for granted in modern times, but in historic times, paint colors had to be derived from natural sources.  Colorful sedimentary stone dust, often reds and browns with ferrous composition were used, for example to provide color to historic paints, but the hue and brilliancy was limited.

By the late 19th-century, even before the construction of the vast majority of the historic brick buildings of Washington, DC, modern paints, similar to those used today, with synthetic pigments were first used in large-scale.  The differences created in the technological development allowed for robust, brilliant and vivid colors which could create a distinct contrast to highlight otherwise unintentionally muted details in the carpentry and architectural embellishments. 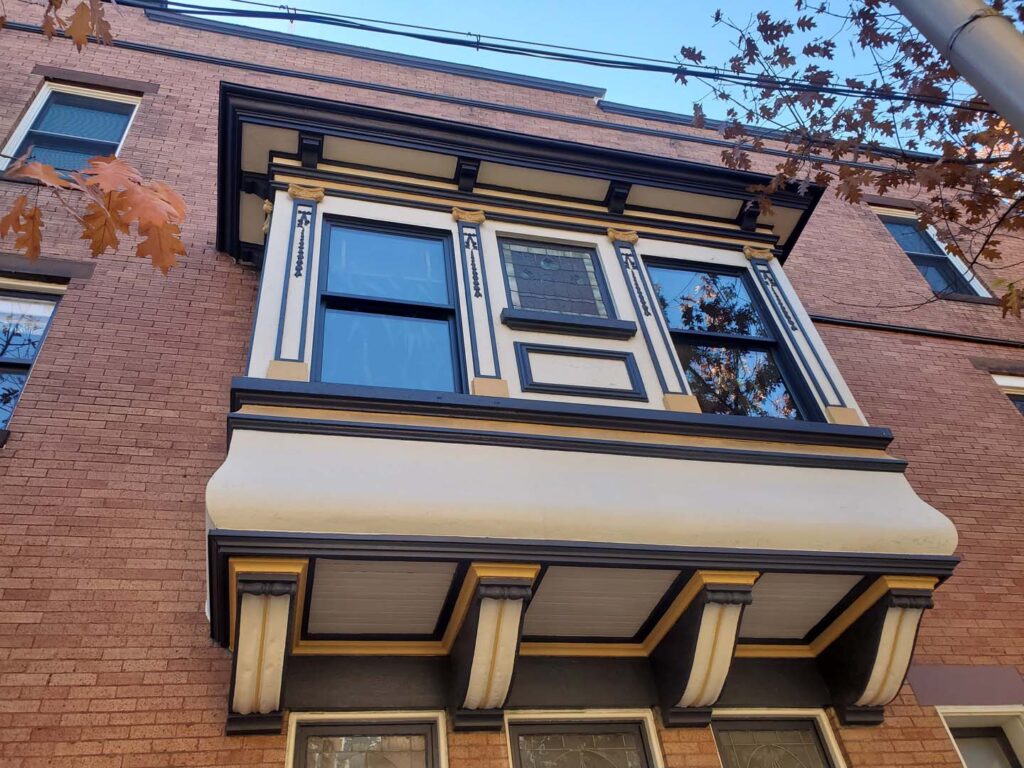 The three sided projecting bay shown in the picture below, is beveled, eased to an extent to provide a more subtle nature to the projecting construction.   It looks more natural than the box bay.  The box bays are technically less structurally stable, over many decades of natural building degradation and they appear awkward and top-heavy, by comparison, but they have an increased added floor ratio.  As in most building construction decisions or choices between alternatives,  there are trade-offs.

This bay is painted with just one color, in a semi-gloss sheen.  The luster in the semi-gloss, and any degree of increased or higher gloss in paint will highlight any variation in the plane or inconsistency of the substrate.  This particular bay is clad with a sheet metal and the luster of the semi-gloss paint highlights every imperfection and defect in the surface.   We would generally recommend limiting the use of higher sheen paints to accent details and linear trim. 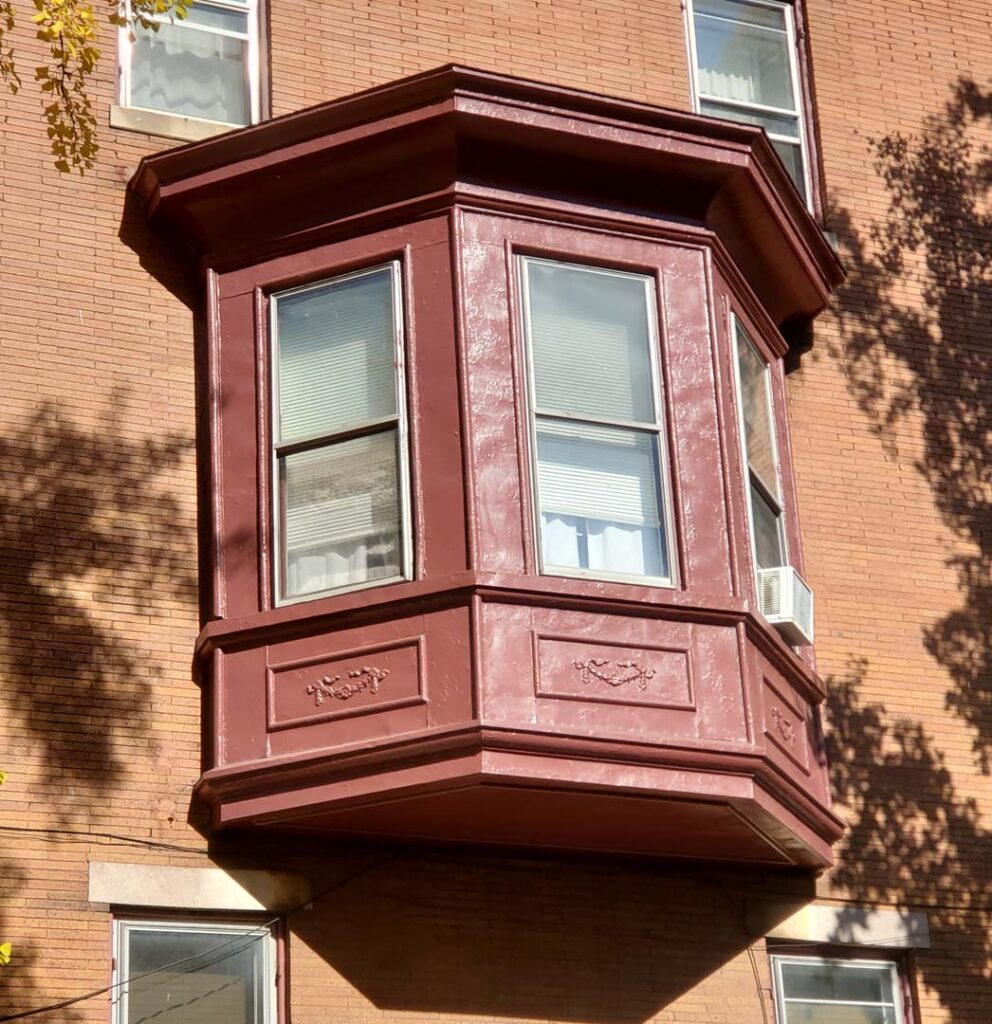 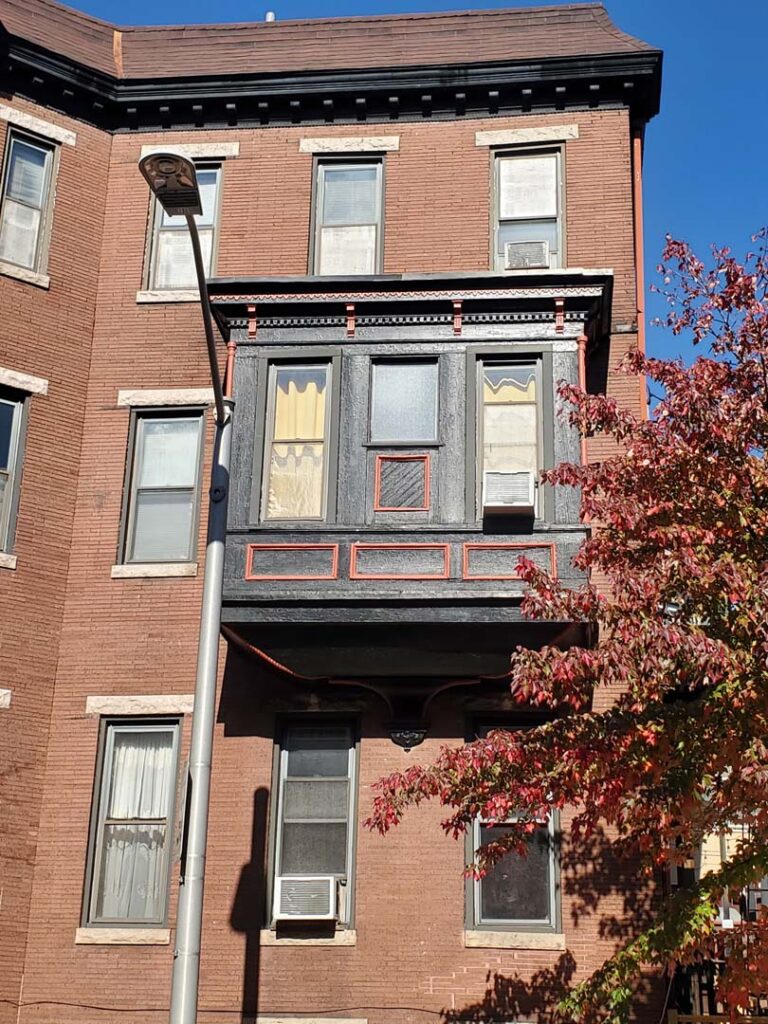 The Box Bay shown in the photo below is similar in many ways, but has an additional architectural flared base which add interesting detail and embellishment, balancing the overall form, by reflecting the roof projection to an extent. 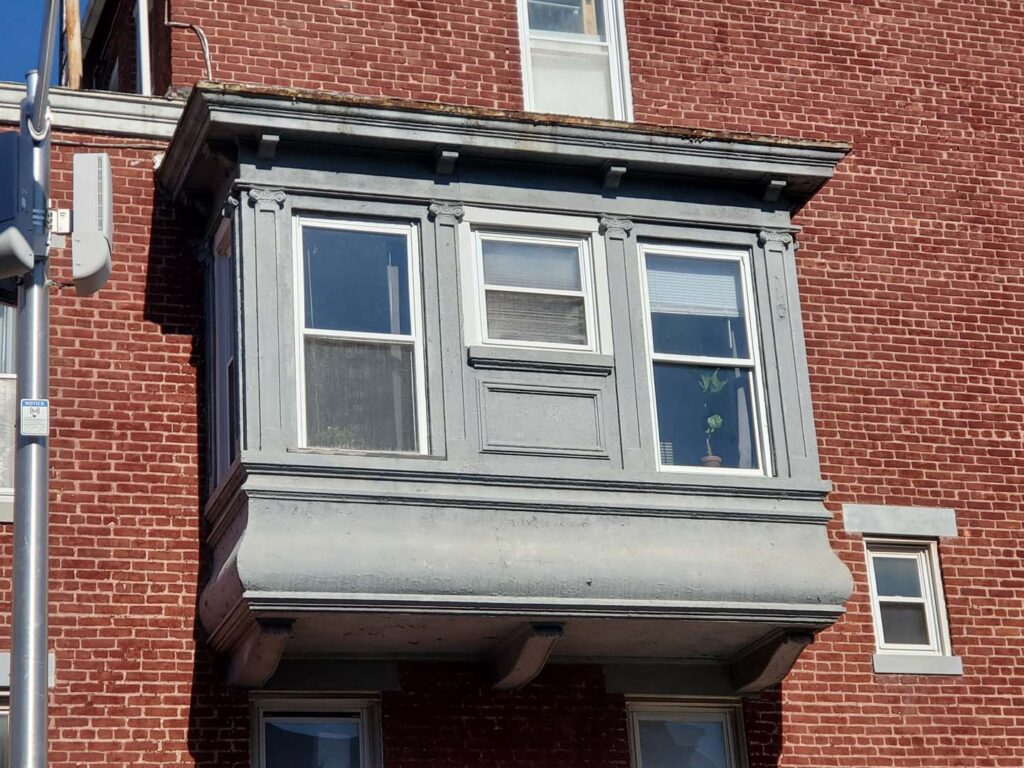 The example shown in the next photo below is particularly curious.  The roof has a cornice at the eave, reflecting a historic detail, but the remainder of the entirety of the construction lacks architectural detail.  In fact, the box bay has few and comparatively, proportionally small windows, and is clad with a simple lap siding, lacking architectural panels or aesthetic interruption. 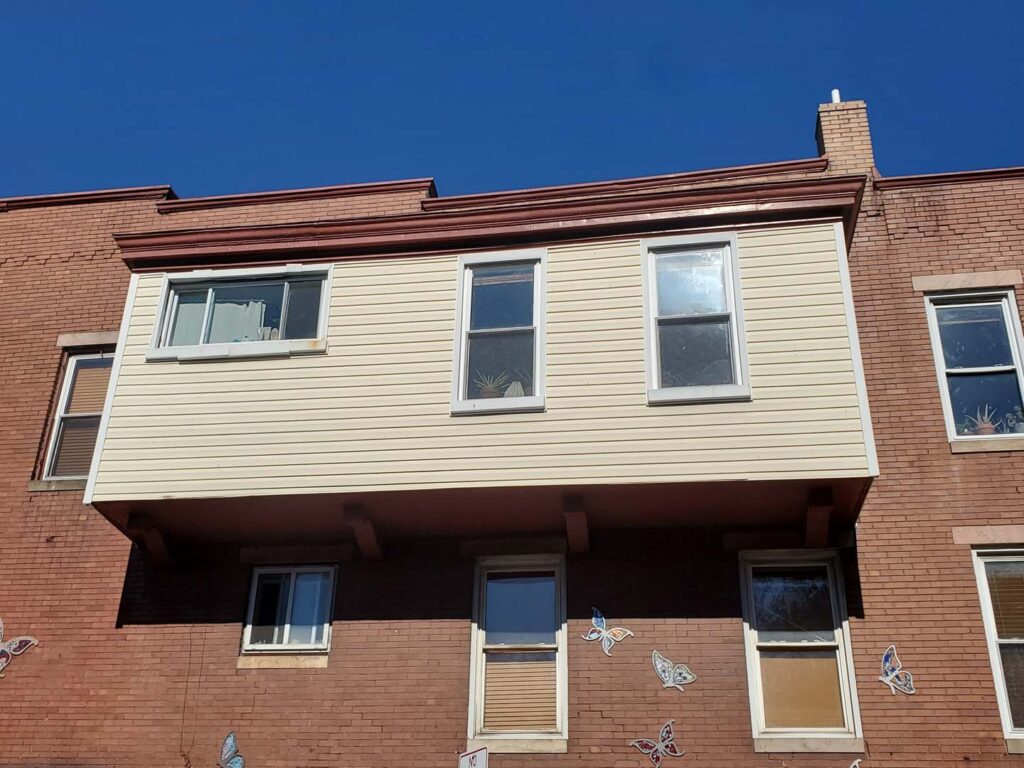