A Historic Brick Facade With a Multifaceted History

Last week, we took a look at a mid-century building facade as part of a case study to examine and understand historic masonry. This week, we’re taking a look at a  renovated rowhome in a historic neighborhood here in Washington DC.  This building is at the end of a row of homes and therefore has an exposed alley side of the building. Compared to a typical rowhome, this building has a much larger exterior facade.  Typical rowhomes have an exposed front and rear facade.  In this case there is the side brick facade which is larger than both the front and rear facades combined and it is also quite a large building.

Large exterior facades allow for greater fenestration, the entrance of external light from the outside.   Typical rowhomes can feel a bit like a dark tunnel.  The windows are typically limited to just the front and rear facades and from there, light runs through the longer narrow length of the building.  In urban construction like this, historic brick buildings often employ an assortment of techniques to add additional exterior wall area and greater fenestration but these methods are limited in efficacy, very costly, require significant maintenance, and cause thermal impacts to the interior space.  Some examples include: lightwells, skylights, and rear ells.)  In this case, this large building facade has over 21 individual window openings, so this particular building has significant exterior light on the inside, in contrast to so many of the neighboring buildings with dark interiors.

Segmented arches are extremely common in Washington DC.  They are sort of a hybrid between a half circle Roman arch and flat style jack arch.  It’s counterintuitive, but segmented arches are not actually self supporting. They rely on internal structural framing to support the brick above. They are built so that they do apply and transfer some of the header load to the buttressing springer-like sides of the window opening, but they are not indefinitely nor independently self supporting.  (See the following article examining a corbelled butterss wall support and the following article on Roman arches for more information on this subtopic.

The picture below shows an example of a jack arch. This jack arch has been repointed with a light color mortar which stands in contrast to the adjacent older mortar to the left. 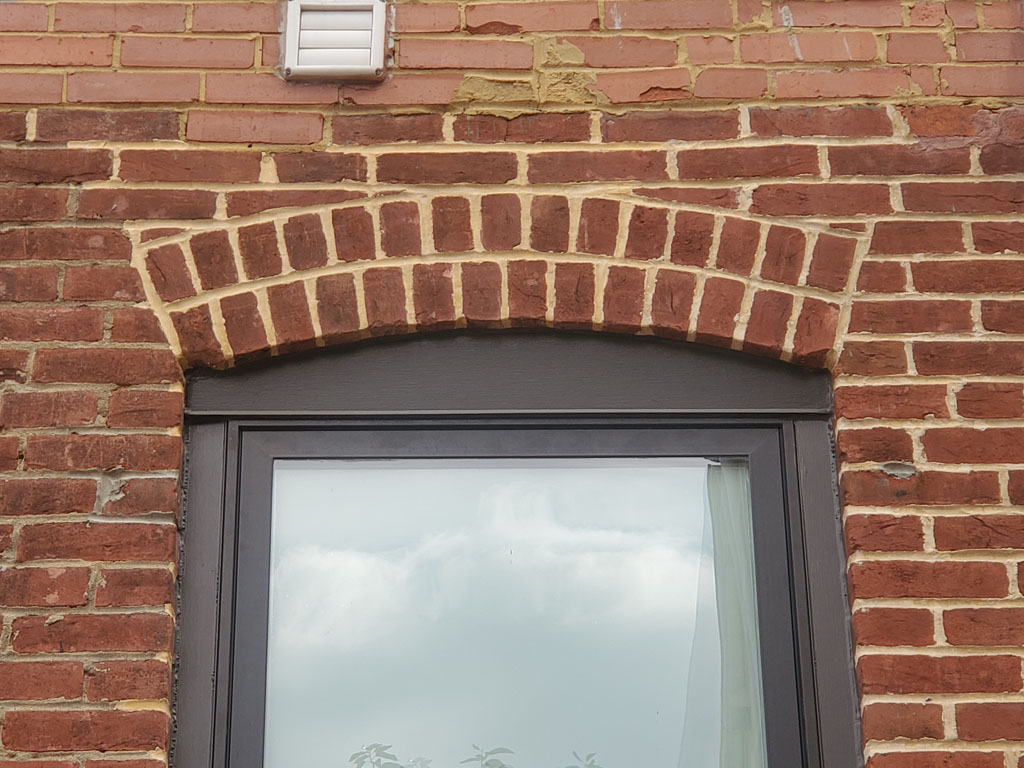 In the picture below, you can see an example of a historic jack arch. This jack arch has not been pointed in the most recent years but has had some refurbishment done in decades past.  You can see mortars of different colors at and around the same area of brickwork.  The mortar at the lower area of the bricks has a light red tint, almost similar to mortar made from brick dust and lime, as was done in certain types of construction in historic times, generally a technique only used for pressed brick, not common brick as shown here. 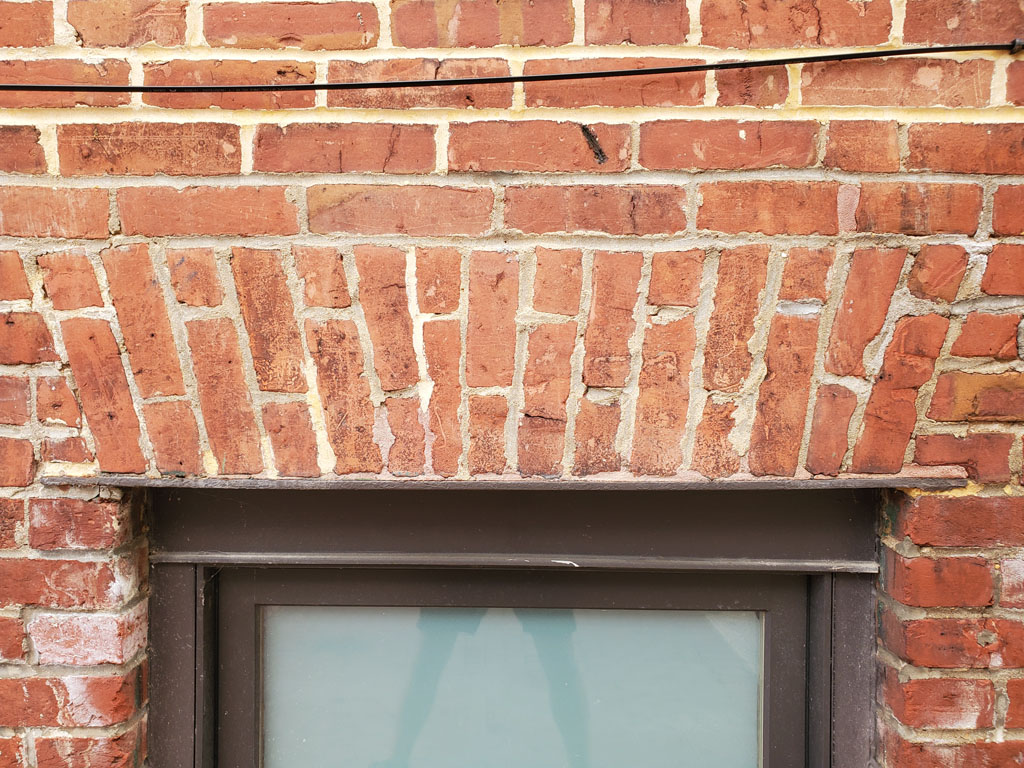 In the picture below, you can see that there is a concave, slightly downward bent shape to the steel lintel above the window opening. Unlike modern steel angles, this lintel is just a flat bar. We’ve talked about the limitations of spanning arches built with flat bar or flat stock metal.  Metal is generally strong, but even steel is not strong enough to support masonry over long periods of time with relatively thin flat bar elements.   By comparison, structural angles are built with an “L” shape and the vertical web in a structural steel angle helps support the tensile force of vertical deflection indefinitely when properly maintained.

The next picture below shows the underside of that same flat bar, you can see that that floodboard stops short of the depth of a single brick wythe thickness and does not have a vertical return upwards similar to a steel angle. 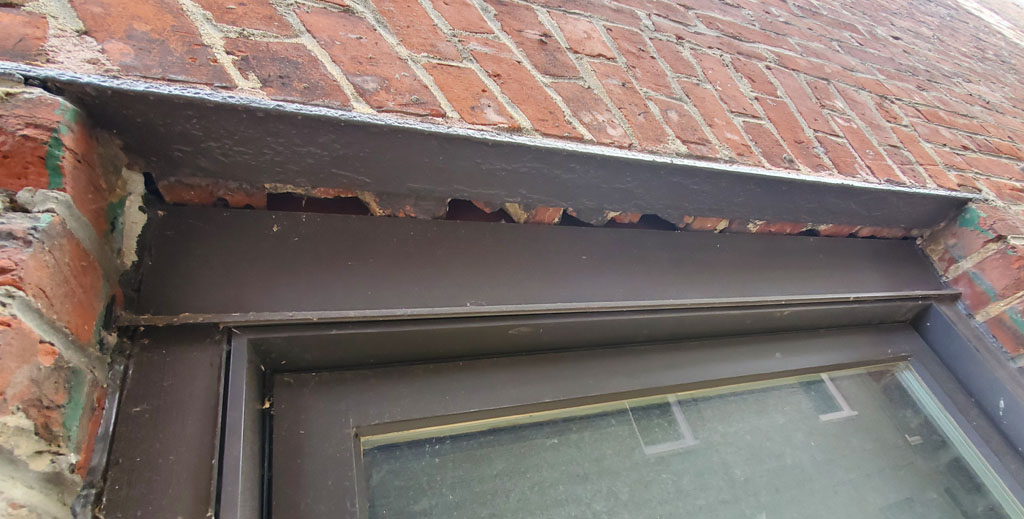 Historic construction is generally considered to be of higher quality than modern construction. It is true that in most cases, higher levels of labor and training were used to build historic buildings, but in this case, even in historic times, they misunderstood the structural limitations of this type of steel support. In modern times, we would use stronger systems and build this type of building assembly with greater structural capacity.

In the picture below, you can see the downward concave shape of the steel support. 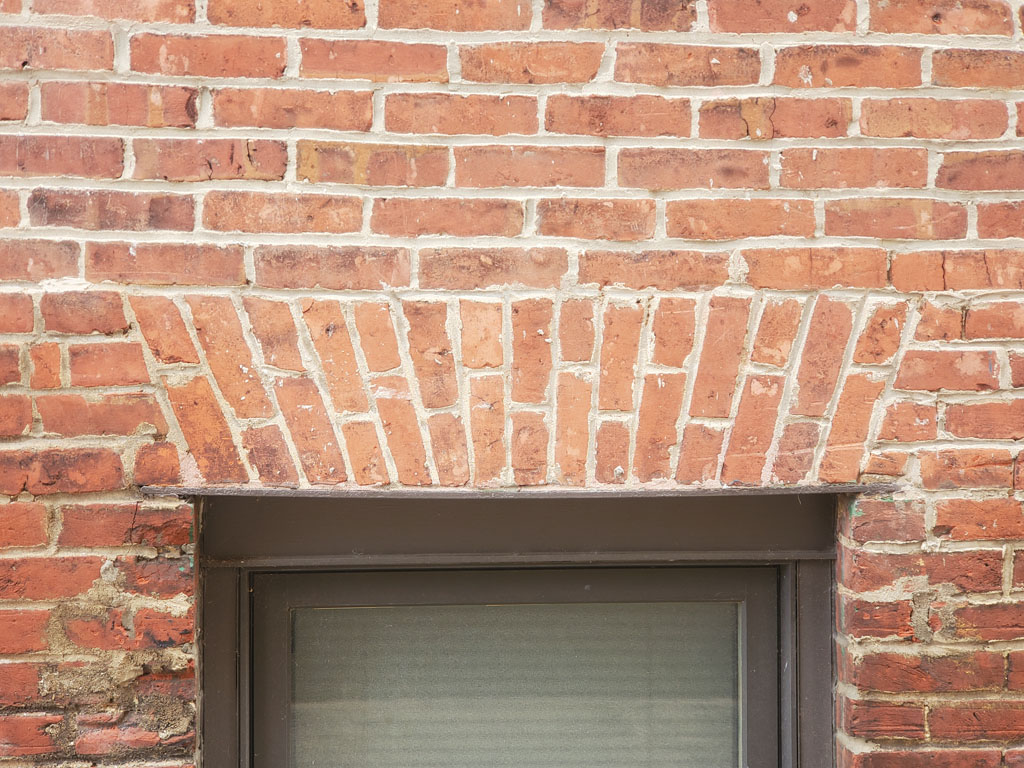 You can also see at the facade there are several locations where window openings have been modified, truncated or shortened and even closed in completely.   The 3 closed in openings, prominent and shown in the picture below were previously part of a stairwell. Those windows allowed light to come into the stairwell. However currently in the new interior layout the stairwell has been removed from this location and those windows have been subsequently infilled.

Many decades after the original construction, supports have been installed to resist lateral deflection. In the picture below we show an example of a barnstar installed at the side facade this building. 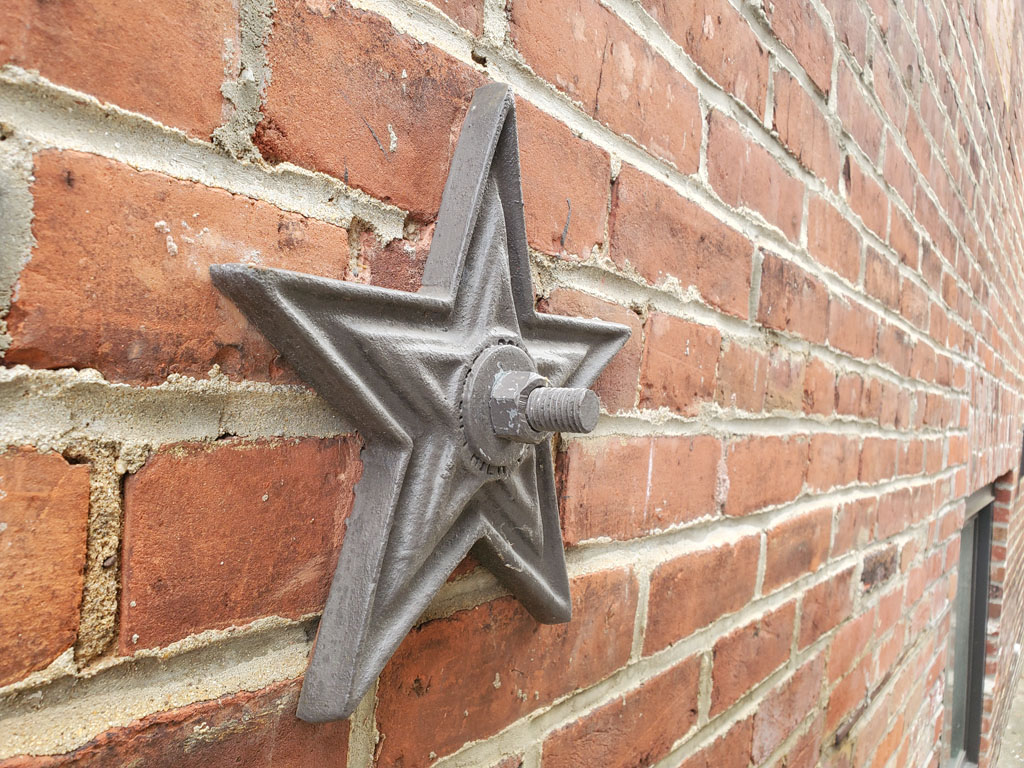 The all-thread that runs through the center of that barnstar is held in place with a nut and a washer and that threaded rod runs through the exterior brick, into the internal wood framing members of the building. At the Internal wood framing of the building, cross blocking is installed to support and resist lateral deflection,  Lateral deflection is the force of a large brick wall pressing outwards as it sags over time and loses its structural capacity.

By comparison, the side facade, built with common brick and a common mortar joint, has much greater inconsistency between the Individual brick units.

The next picture shows that difference more closely as in this look across that wall from a shallow angle.   By comparison, the parts of the wall built with the press brick are very flat and true.  Press brick was made with materials that were sifted to a higher level of consistency. Pressed bricks were fired at higher and more uniform temperatures.   As a result, press bricks have very low variation in size and shape and have a higher compressive strength. 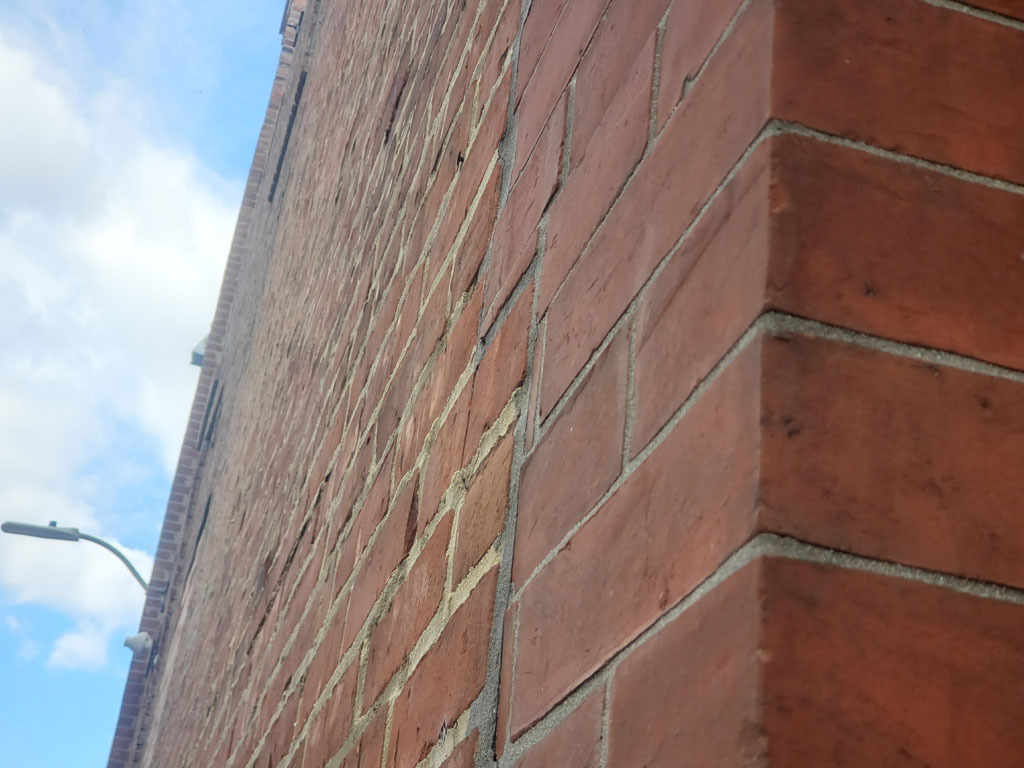 At one of the few locations, where pointing has not been completed at all on this building, you can see the original historic brick mortar, has shown in the photo below. 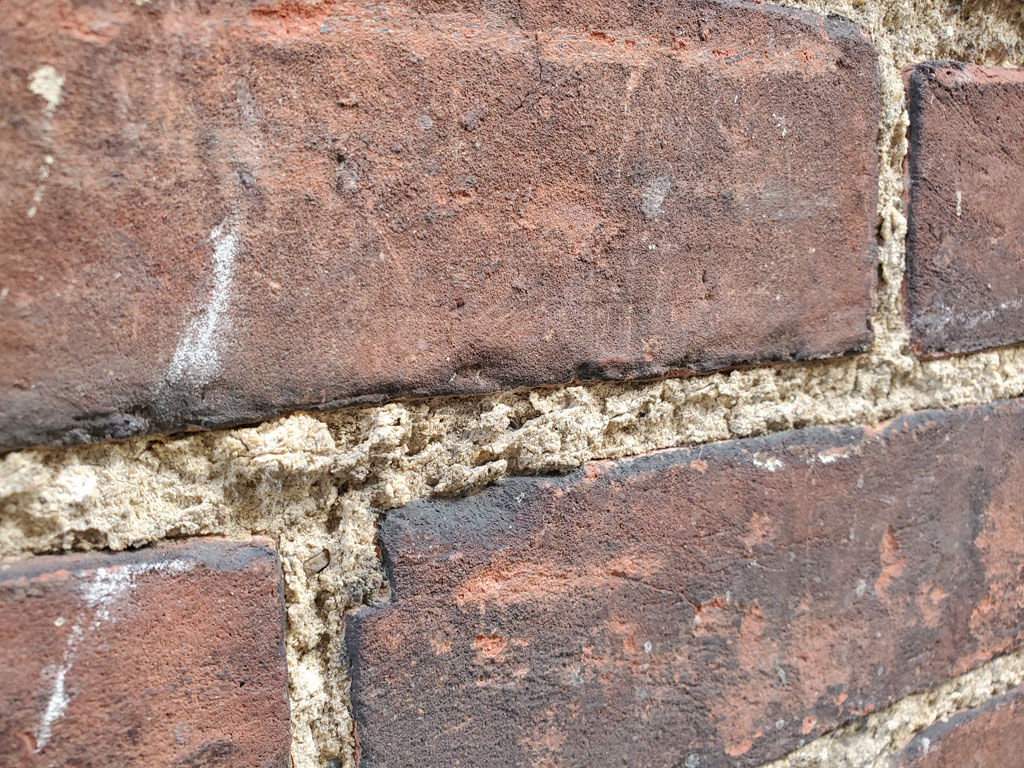 This mortar has a rough and deteriorated surface,. The texture is inconsistent and if you look closely at some spots you can see tiny stones that are mixed into the mortar. 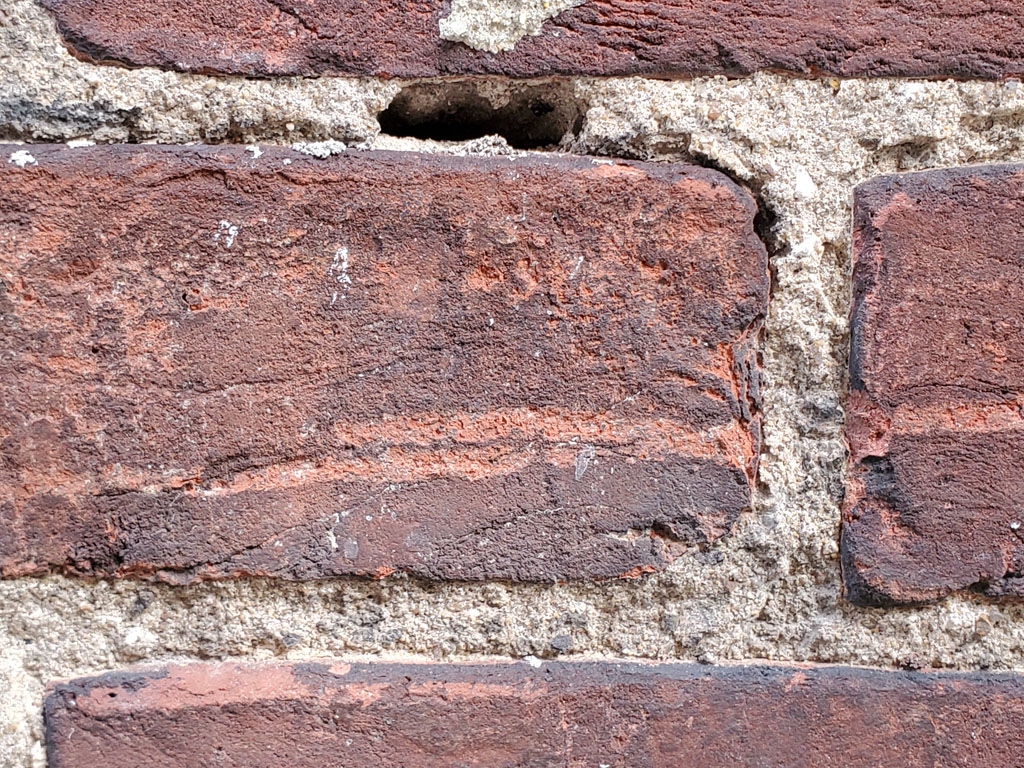 You can also see small white specs of lime that were originally mixed into the mortar.

Even after all of these different attempts to restore the mortar over the years, there are still large areas of the building that need proper and professional pointing. We would of course recommend that all future pointing be done by a trained and competent professional who specializes in historic masonry repointing.  Modern cements should NOT be used and principles of proper pointing should be followed.

The picture below shows an area about 6′ above the adjacent grade where there are large sections of deteriorated mortar joints with recesses that will allow water to pool and enter deeper into the brick wall assembly. 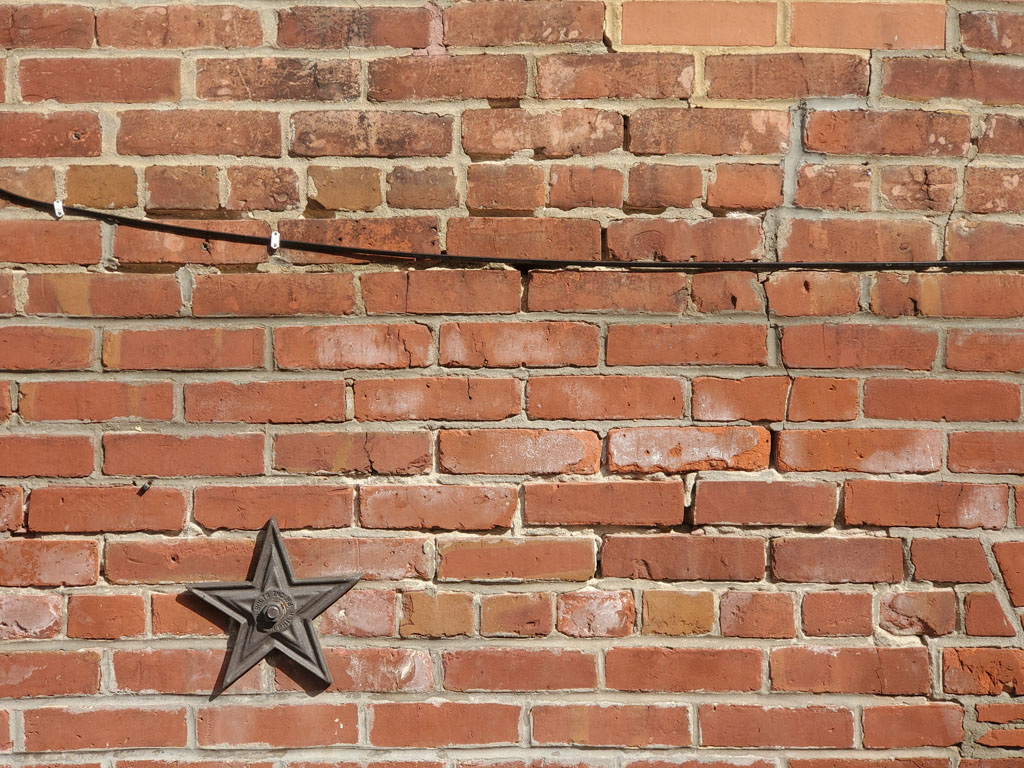 The collage below shows some of these areas of deterioration up close. You can see the recess of the mortar, where the mortar has deteriorated away from the face of the historic brick. 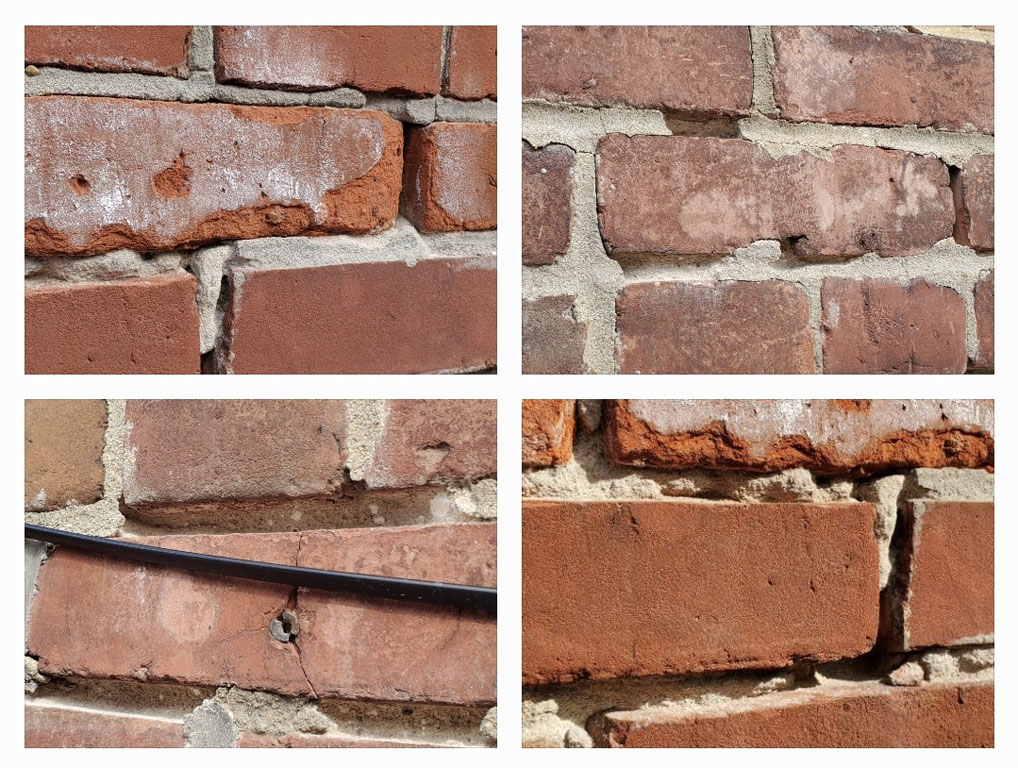